Thwarting Terrorist Bombing Through Awareness—Part 1 | YMAA
Skip to main content
FREE Shipping Order Over $70. (US Only, Conditions apply)    |   Up to 20% Off. Exclusions apply. 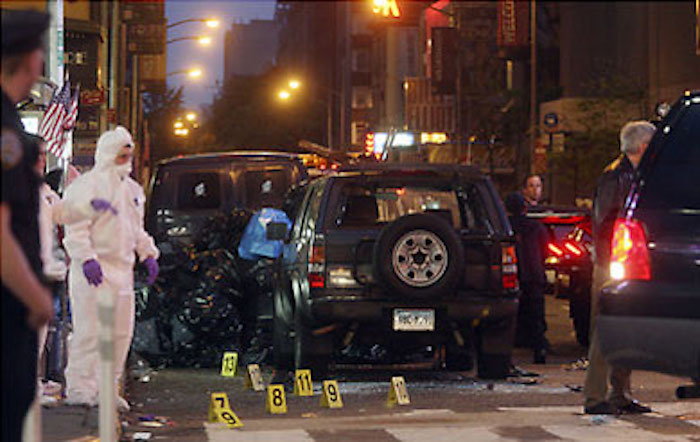 This article was written right after the bombing on the London transit system in 2005 and was published in Neth Publications. It is just as timely today with the recent bomb threat in New York City in April 2010. Although some of the statistics are five years old, the core of the article tells you that awareness is the key to survival...

"One man willing to throw away his life is enough to terrorize a thousand."

This article was written right after the bombing on the London transit system in 2005 and was published in Neth Publications. It is just as timely today with the recent bomb threat in New York City in April 2010. Although some of the statistics are five years old, the core of the article tells you that awareness is the key to survival and that there are things you can do proactively to remain safe.

Publicity surrounding the recent attacks on the London transit system combined with statements by security professionals and government authorities that it is impossible to completely guarantee safety in an open society may lead many to feel helpless in the face of terrorist threats. After all, no matter how well trained a martial artist you are; you simply cannot fight a bomb or a bullet with your hands or feet and expect to survive unscathed. It is natural to be fearful, yet truly not necessary. There things you can proactively do to remain safe from such attacks.

Before we get into the details, however, it is useful to put these things into perspective. Despite the fact that they get a lot of news play, terrorist attacks are actually quite rare in most parts of the world. According to the National Counterterrorism Center, there were 3,192 terrorist attacks worldwide in 2004, for example, with 6,060 people killed, 16,091 wounded, and 6,282 taken hostage for a total of 28,433 victims. Every death is one too many and 2004 was a particularly brutal year for terrorism, well above the historical average. Despite this appallingly high number of victims, it is important to point out that we average 41,962 automobile accident related fatalities in the United States alone every year, roughly seven times number of people murdered by terrorists worldwide.

To put it another way, you are in a lot more danger driving your car down the street than you are from any terrorist threat. That does not mean that the threat is not very real, of course, only that it is more manageable than many folks realize. Furthermore, you can proactively defend yourself against terror simply by becoming aware of and avoiding people and situations that are likely to cause trouble. Seems overly simple, doesn't it, yet the best defense against such attacks is a good sense of awareness.

On the street it is important to pay attention to unusual behaviors, particularly anything that makes you feel nervous or uncomfortable. True fear is a signal in the presence of danger, a built-in warning system we all have but all too few of us pay attention to. Unwarranted fear, on the other hand, is always based upon our memory or imagination. Always listen when you feel fear or any intuitive signal, taking action as appropriate. When you don't feel fear, on the other hand, don't manufacture it. If you find yourself creating worry, explore and discover why.

You cannot walk around in a state of constant paranoia, yet you should be cognizant of suspicious activities. Behaviors that should be a legitimate cause for concern can include people who appear to be conducting surveillance of sensitive areas using a camera, cell phone cam, or video recorder, anyone abandoning an item then leaving the area quickly, someone openly possessing a weapon or any prohibited or dangerous item, or anybody who looks nervous, irritated, or is sweating profusely beyond what you might normally expect with the prevailing weather conditions.

Awareness of environment includes being aware of what is going on around you and listening to your intuition as danger signals arise. Good situational awareness can let you predict and avoid most any potentially difficult situation. It is something all of us instinctively have yet few really pay attention to. In most cases, we should be able to spot a developing situation, turn around, and walk (or drive) away before anything bad happens.

Many self-defense experts use a color code system to help define and communicate appropriate levels of environmental awareness. The most commonly used approach, codified by Colonel Jeff Cooper, was based in large part on the color alert system developed by the United States Marine Corps during World War II then later modified for civilian use. These color code conditions include White (oblivious), Yellow (aware), Orange (alert), Red (concerned), and Black (under attack). While it is possible to skip conditions (e.g., Yellow directly to Black) most encounters cycle up or down all of these levels. Here is how it works:

People in Condition White are distracted or unaware, not only perceiving no danger in their immediate area, but also not alert for any that may be presented to them. A good example is someone who is engrossed in reading a book, talking on a cell phone, or listening to music (particularly when wearing headphones). In this state you become an easy mark for just about any pickpocket, mugger, rapist, deviant, or terrorist bomber you come across. If you are attacked you are very likely going to be hurt before you are able to react appropriately to defend yourself.

On March 11, 2004 , thirteen bombs were abandoned on crowded commuter trains in Madrid (Spain) by suspicious-looking people, many wearing ski masks, yet no one took action before it was too late. Ten of the devices exploded killing 191 people and injuring more than 1,800 innocent victims. Police found three other unexploded devices hidden in backpacks that same day and a fourth on the high-speed rail link between Madrid and Seville on April 2nd. Tests later showed that the explosives matched the type used in the March attacks so it was likely connected to that event.

This tragic incident is a graphic reminder that you should never operate in Condition White while in public places. The only acceptable spot for Condition White is within the confines of your own home and then only if you are safely behind layered security appropriate for your situation.

Although you are not looking for or expecting trouble in Condition Yellow, if it comes up you will have a very good chance to know about it in time to react. People in this condition are at ease, not immediately perceiving any danger, but generally aware of their surroundings. You should constantly be scanning your environment and be able to identify, without re-looking, generally who and what is around you at all times. In Condition Yellow you may spot a suspicious person, situation, or object that warrants further scrutiny.

Body language is important. Predators typically stalk those they consider weaker prey, rarely victimizing the strong. By simply walking confidently and remaining alert you will not only have a good chance of avoiding terrorist bombers but also common criminals and mundane troublemakers, the kind of people you are most likely to tangle with on the street. Anything that stimulates your intuitive survival sense, suspicion, or curiosity should be studied more closely. Examples might include a crowd gathered for no apparent reason, someone wearing heavy clothing on a summer day, a person studiously avoiding eye contact, anyone whose hands are hidden from view, a person moving awkwardly or with an unusual gait, or someone who simply stares at you for no apparent reason.

People in this condition have become aware of some non-specific danger (via Condition Yellow) and need to ascertain whether or not there is a legitimate threat to their safety. The difference between conditions Yellow and Orange is the identification of a specific target for further attention. You may have stumbled across a suspicious package, heard a nearby shout, or become aware of an unidentified sudden noise where you would not have expected one. You might also have seen another person or a group of people acting abnormally, someone whose demeanor makes you feel uncomfortable, or somebody whose appearance stands out as unusual.

In this state you should focus on the nebulous danger, but not to the exclusion of a broader awareness of your surroundings. Trouble may be starting in other places in addition to the one that has drawn your attention (e.g., ambush situation). If the danger is real, you will elevate to Condition Red. If it turns out to be a false alarm, you simply revert back to Condition Yellow.

People in this condition have been confronted by a potential threat or adversary or are in close proximity to someone who is becoming very aggressive and is near enough to confront them quickly. Condition Red means that you have every reason to believe that someone or something poses a clear and present danger to you or someone with you.

At this point it is prudent to begin moving away toward escape routes, locations with strategic cover, or areas of concealment if you can do so, being prepared to fight your way to safety as necessary. Concealment (e.g., a bush) keeps bad guys from seeing you but does not provide much physical protection, while cover (e.g., a stone wall) can keep the bad guy and/or his weapon from getting to you should he or she wish to attack. Many types of cover can insulate you from a bomb blast or at least offer a degree of protection against shrapnel. If the threat is a person rather than a suspicious object you may be able to withdraw or otherwise diffuse the confrontation through verbal de-escalation techniques.

People in this condition are actively being attacked. Verbal challenges and de-escalation attempts are no longer useful. You must flee or fight back, using any appropriate distractions and/or weapons at your disposal. If the threat is a person, your intent must be to stop the assault that is in progress so that you can escape to safety or otherwise remain safe until help arrives. Your goal is to be safe, not to kill your attacker or teach him/her a lesson. If the attack is an explosive device it is too late to find cover since it has already gone off, another reason why early awareness and avoidance are so important.