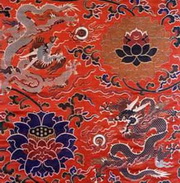 Traditional Chinese silk clothing has a long history, dating back to the 27th century BC. Once the skill of spinning silk, or sericulture, was discovered, the Chinese made silk exclusively for 3,000 years without divulging the secret of the process and it was a valuable commodity for trading.

Around the 2nd century AD, China changed its strategy and began the extensive exporting of silk, through the network of mountain and desert passes to the West known as the Silk Road. Silk was considered a luxury unlike anything the world had ever seen or felt, and it gained wide popularity. The ancient Chinese weaving looms were far more sophisticated than those of any other culture at that time on Earth, some of which made complex and beautiful brocades. Over time, silk cocoons were smuggled out of China by traders and merchants, and the art of silk reeling and weaving slowly spread out to other countries and continents.

Worldwide silk production worldwide peaked in the early 19th century, and then began a steady decline to the present day, where it is still primarily produced in China. The traditional silk used in tai chi clothing and kung fu uniforms for the last 1,000 years slowly became more difficult to find, as fewer people used it, resulting also in a gradual decline in its quality. During the 1990's and early 21st century only a handful of manufacturers, including YMAA Publication Center, were able to continue to produce traditional raw silk martial arts uniforms.

Silk Was a Privilege

The wearing of silk martial arts uniforms is an ancient tradition in Gongfu (kung fu) and Taijiquan (tai chi chuan) history. Though peasants in China did not officially gain the right to wear silk clothing until the 1600's, martial arts practitioners, many of them monks and nuns in Buddhist and Taoist monasteries, wore silk robes throughout all their daily activities, including kung fu and tai chi practice. Taiji philosophy predates the martial art of taijiquan by thousands of years, and it is likely that these early philosophers wore silk robes daily as well.

A kung fu uniform should be strong, durable and loose fitting. Kung fu pants allow for deep stances, high kicks, and repetitive movements in training. A traditional kung fu uniform is made of raw silk, rather than the shiny silk often seen in demonstrations, it is designed to withstand kung fu training and competition. Breathable like cotton, this type of silk allows the martial artist to keep warm when training lightly, or to dry off quickly when he or she breaks a sweat. The black silk kung fu jacket and pants set is the most popular traditional kung fu uniform combination.

The traditional tai chi uniform has the same requirements. Tai Chi pants must also be strong and loose so you may strive for your lowest Fu Hu Bu stance in the Snake Creeps Down movement, and strong enough not to tear when you Turn and Kick with Your Heel. The tai chi jacket is soft and flowing, like the tai chi form itself. The sleeves are long, ending about midway down the back of your hand, so that at full extension of your arm, the silk fabric still covers the forearm. The combinations of both white pants and white top, or black pants and white top, are the most popular for traditional taiji silk uniforms.

Silk Is Good for Your Energy

Silk is natural fabric that does not impede your Qi circulation in any way. Unlike most man-made materials, like polyester or nylon which can create a static field around your body, silk allows your energy (Qi) to flow smoothly. Because your Qi circulation is of utmost importance in Chinese martial arts and for your health and vitality, it is essential for martial artists, meditators, and anyone interested in a healthy lifestyle to wear natural fibers at all times for optimal Qi circulation. This beautiful silk clothing also becomes softer each time it is washed, and is very comfortable for wearing at home casually, or out in the evening as formal wear.

Traditional Chinese silk uniforms have been an essential part of martial arts culture for thousands of years. As the arts continue to be passed on to future generations, these classical outfits will remain as the ideal clothing for all martial artists.