Training Exercises for Tai Chi Ball | YMAA
Skip to main content
FREE Shipping Order Over $70. (US Only, Conditions apply)    |   Up to 20% Off. Exclusions apply. 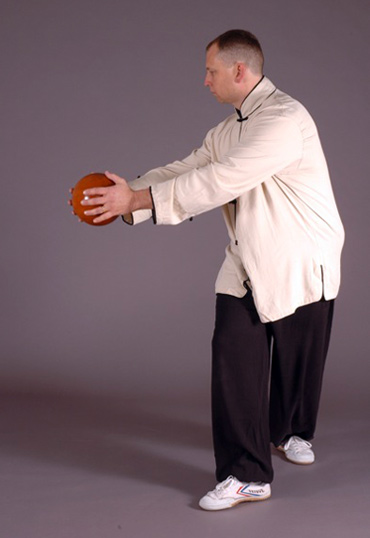 The first pattern in external training exercises is known as circling. There are four different methods to complete the circle. Two are related to a vertical plane and two are related to a horizontal plane. The motion forward over the top of the circle is considered yang forward circling while the motion backward over the top of the circle is considered yin backward circling. The following discussion is about vertical circling (Chui Zhi Rao Quan). If you wish to explore more about vertical and horizontal planes, please refer to Tai Chi Ball Qigong by Dr. Yang, Jwing-Ming and David Grantham and DVD Tai Chi Ball Qigong—16 Circling and 16 Rotating Patterns—Courses 1 & 2 by Dr. Yang, Jwing-Ming

Vertical circling refers to a vertical plane that extends out from the center of your body. It is also known as the median, or midsagittal plane, which divides the body into the symmetrical left and right sides. Imagine you are carrying a large bass drum like the ones used in a marching band. Basically, you will be tracing the outline of the drum. Your pattern begins at the center of the circle and gradually spirals out until reaching your maximum range of motion. After you have completed your number of repetitions, you will gradually decrease the size of the circles until you arrive back at the center of the circle.

The first stage of the vertical circling pattern is a yang, or forward pattern, while stationary. Stand in ma bu; feet parallel approximately shoulder width apart, knees slightly bent. Lightly cradle the ball between your hands and hold it in front of your dan tian.

Take a moment to lead your qi to your dan tian using a few deep breaths. To begin circling, inhale and initiate the movement of the ball from your dan tian. As the movement continues up your spine and into your arms, draw in your chest and move the ball up toward your body.

Keep the wrists relaxed while moving the ball. Reaching the top of the circle, allow the chest to open up and exhale while extending the arms outward. Allow the wrists to settle and the chest to begin closing as the ball begins to return to the original position.

Gradually increase the size of the circling with each repetition until you have reached the maximum range of motion desired. The maximum size or diameter of your circle will depend on you. It should be large enough to allow your arms to extend fully out in front of your body without locking the elbows and no higher than your eyes. Throughout the motion, you should remember to keep your tailbone tucked in slightly and your head held upright, inhaling as you bring the ball toward you and exhaling as the ball moves away from you. Refer to the diagram that will assist you with your breathing patterns as well as your chest movements.

Once you have built up a smooth circular motion with the correct coordination of spine and chest movements, you should circle the ball vertically, moving it no more than the width of your shoulders. The ball should now follow a path from one shoulder diagonally down to the opposite hip.

The next stage of this vertical exercise is to twist your torso as far as you comfortably can, both to the left and right while vertically circling.

You may also circle the ball diagonally from one shoulder to the opposite hip. Practicing this exercise with your upper torso twisted in either direction allows you to condition your joints, ligaments, tendons, and muscles on different angles. In ancient times, this training was necessary for those who often fought while on horseback.

Repeat each stage of this circling action for at least 12 repetitions; then you should turn back to face forward and gradually reduce the circling pattern until you have spiraled back to your center.

The next stage of this pattern is to perform it while rocking. Rocking is the initial stage of stepping and teaches you to connect the rooting of the feet with the rest of the body. To begin the rocking pattern, start in the ma bu stance with the taiji ball held in front of your dan tian. From this position, step into your si liu bu stance. Place either foot forward first. Practice on both sides.

To start circling, inhale while rocking slightly aft. Arch your back slightly, and draw the ball downward and in toward your body. Reaching the most aft position, begin to exhale and start your forward motion while moving the ball over the top of the circle and forward. Settle the wrists, close the chest and allow the ball to return to the original position, completing the circle.

Once again initiate the pattern with small circles; then gradually increase to larger circles. The ball will appear to spiral outward when observed from the side. You should note that the initialization of movement now starts with the feet and continues up through the body ending with the ball.

Next, vertically circle the ball, as you did in the stationary exercise, diagonally from one shoulder to the opposite hip while rocking. Once you become comfortable with this movement, increase your range of motion by twisting your waist to the left and right while rocking. After a minimum of 12 repetitions, return to the center and continue to decrease the circles until you reach your original starting position.

Step back into your ma bu stance, and then step into the si liu bu stance with the opposite foot forward. Repeat the pattern for an additional 12 repetitions for each section. To complete this exercise, return to the center, reduce the pattern to the original position, and step back into ma bu.

The next step is to vertically circle the taiji ball while stepping. Stepping is simply a continuation of rocking. Instead of remaining in a fixed area, continue the motion forward or backward as desired. This can be done using two methods: 1) Use momentum to move forward or backward. 2) Use a balance technique of stepping. This is where the ball moves forward while you simultaneously slide your foot backward. It is a linearly movement and in either technique you may take more than one step in either direction.

Start in a ma bu stance, step into si liu bu, with either foot forward. Hold the taiji ball in front of your dan tian. Begin to vertically circle the ball in a yang direction as described in the rocking pattern. Continue this action until you have reached your maximum range of motion.

To step forward, begin from the most aft position in rocking. You will be transitioning from inhaling to exhaling and your chest movements will be moving from opening to closing. The path of the ball will be rising up in front of your body.

Initiate the forward momentum by pushing off your aft foot, and allow the energy to flow up your rear leg into the waist. Turn both your waist and forward foot out slightly and begin to shift your weight forward. From this point, the energy will transfer from the waist through the arms and into the ball. This will cause the ball to flow over the top of the circle. As you extend your arms, the ball will pull the body forward.

Slide the aft foot forward and set it down so you are in a si liu bu stance with the opposite leg forward. The taiji ball will now be circling down and away from your body. This allows the transfer of energy back down through the body and into the forward foot. Continue stepping until you have traveled as far as you can in your practice area.

To step backward, initiate the movement from your most forward position of rocking. You will now be transitioning from exhaling to inhaling and your chest will be moving from closing to opening.

Initiate the momentum by pushing off the forward foot and shift your weight to the aft foot. Your body will now pull the ball through the bottom of the circle and aft. Slide your forward foot aft and place it down, toes pointed 45 degrees away from your centerline. You will now be in a si liu bu stance with the other leg forward. The forward foot should be readjusted so the toes are pointed in slightly toward your centerline.

To step back farther, simply rock forward; then push off the forward foot again creating the same momentum as before. Continue this stepping pattern until you have reached the original starting area; then decrease the circling pattern back to the center and step up into your beginning stance.

You can then practice taking more than one step at a time forward and or backward while circling the ball. Depending on the size of your circle and the speed, you may find you can take two or possibly three steps per one circle. It is also acceptable to combine your forward and backward stepping at any time.