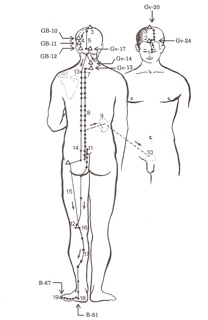 In Part 1 of the Twelve Primary Channels there is a short review of the twelve primary channels and the eight extraordinary meridians. Part 2 of the Twelve Primary Channels discusses the stomach channel, the heart channel, and the small intestine. Each Yang organ is associated with and harmonized by a Yin organ. The following discusses the urinary bladder, the kidney channel, and the Pericardium Channel of Hand.

The Kidneys (Yin) and the Urinary Bladder (Yang) are paired Organs. They correspond to Water in the Five Phases, the winter season, the cold climactic condition, the northerly direction, the color black, the emotion of fear, the taste of salt, a rotten smell, and the sound of groaning. Their sensory organ is the ear. Their opening is the urethra. They control the bones, marrow, and brain, and their health is reflected in the hair of the head.

The main function of the Urinary Bladder is to transform fluids into urine and excrete it from the body.

In Qigong, the Urinary Bladder has never enjoyed serious attention. However, its pairing partner the Kidney is one of the most important organs—one with which all Qigong practitioners are concerned and train most often. The reason for this is simply that the Kidneys are the residence of the Original Essence.

The Kidney Channel of Foot—Lesser Yin

The Kidneys (Yin) and the Urinary Bladder (Yang) are paired Organs. They correspond to Water in the Five Phases, the winter season, the cold climactic condition, the northerly direction, the color black, the emotion of fear, the taste of salt, a rotten smell, and the sound of groaning. Their sensory organ is the ear. Their opening is the urethra. They control the bones, marrow, and brain, and their health is reflected in the hair of the head.

The Kidneys store Original Essence (Yuan Jing) and are therefore responsible for growth, development, and reproductive functions. They play the primary role in water metabolism and control the body’s liquids, and also hold the body’s most fundamental Yin and Yang.

Because the Kidneys are the repositories of the basal Yin and Yang of the body, any disorder, if sufficiently chronic, will involve the Kidneys. More significantly, a disease of the Kidneys will usually lead to problems in other Organs. Methods of strengthening the Kidneys are therefore used by both medical and Qigong societies to increase or maintain vitality and health. The symptoms of Deficient Kidney Yang or Yin are typical symptoms of the disorder, and will appear to a certain extent as Deficient Yang or Yin patterns in any Organ.

It is easy to understand and memorize the symptoms of Deficient Kidney Yin if one learns the correspondences of the Kidneys and remembers that Yin represents the constructive, nourishing, and fluid aspects of the body. Usually, the lower back is weak and sore, there is ringing in the ears and loss of hearing acuity, the face is ashen or dark, especially under the eyes. It is common to feel dizziness and thirst, and to experience night sweats and low-grade fevers. In addition, men have little seamen and tend toward premature ejaculation, while women have little or no menstruation.

Deficient Kidney Yang symptoms are significantly associated with loss of energy or warmth. Similar to Deficient Kidney Yin, there is commonly ringing in the ears, dizziness, and soreness in the lower back. However, the soreness is characterized by a feeling of coldness, lassitude, and fatigue. Weakness in the legs can be noticed. In men, there is a tendency toward impotence, and in both sexes, clear and voluminous urine or incontinence.

Usually, Deficient Kidney Yin generates similar disorders in the Heart and Liver, while Deficient Kidney Yang disturbs the functions of the Spleen and Lungs. The progression could be in the opposite direction. When this pattern is associated with the Lungs, it is called “Kidney Not Receiving Qi,” a type of wheezing characterized by difficult breathing, mainly during inhalation. In addition to the Deficient Kidney Yang symptoms, this condition is also manifested by a faint voice, coughing, puffiness in the face, and spontaneous sweating.

The Kidneys perform an important role in the metabolism of water. If these functions are disrupted, the condition of Deficient Kidneys will lead to Spreading Water.

In Qigong practice, Essence (Jing) is considered the most original source of human vitality. Qi is converted from Essence, and this Qi supplies the entire body and nourishes the brain and spirit. It is believed by both Chinese medical and Qigong societies that the Kidneys are the residence of Original Essence. In order to protect your inherent Essence, you must strengthen your Kidneys. Only when your Kidneys are strong will you be able to keep your Essence at its residence. Therefore, keeping the Kidneys healthy has become one of the most important subjects in Qigong.

Maintaining the Kidneys in a healthy state includes protecting the physical kidneys from degeneration, and maintaining a smooth and correct level of Qi flow. In order to reach this goal, the diet must be considered. For example, too much salt is harmful to the Kidneys. Eating too much eggplant will weaken the Kidneys. In addition, the condition of the body is also important. Such things as over-working without proper rest will increase tension on the Kidneys and make the Qi flow stagnant. In winter, the Kidneys will have more tension than in summer. Due to this, the Qi flow is more stagnant in the wintertime than in the summertime. Therefore, back pain problems increase in the winter.

In order to protect the Kidneys, Qigong practitioners have studied the relationship of the Kidneys to nature, food, and even to emotional states. They have developed massage techniques and specific exercises to increase Qi circulation in the Kidneys during the winter. Since the health of the Kidneys is related to the emotions as well, learning how to regulate the mind in order to regulate the Qi has become one of the major training methods in Qigong.

The Pericardium Channel of Hand—Absolute Yin

The Pericardium (Yin) and the Triple Burner (Yang) are paired Organs. They are said to correspond to the “Ministerial Fire,” as opposed to the “Sovereign Fire” of the Heart and Small Intestine. Though the Pericardium has no separate physiological functions, it is generally mentioned with regard to the delirium induced by high fevers.

The regulation of Qi in the Pericardium is considered a very important subject in Qigong.

It is believed that the Heart, the most vital organ in your body, must have a proper level of Qi circulation in order to function normally. The Qi level of the Heart can be raised easily to an abnormal state by illness, emotional disturbance, exercise, or injury. The function of the Pericardium is to dissipate the excess Qi from the Heart and direct it to the Laogong cavity, located in the center of the palm.

From Laogong, the excess Qi will be released naturally and hence, regulate the Heart’s Qi level. The Laogong cavity is used in Qigong massage to reduce the body’s temperature during a fever. You can see that the purpose of the Pericardium is to regulate the Qi in the Heart through the Laogong cavity.

You should understand that in Qigong it is believed that there are five centers (called gates) where the Qi of the body is able to communicate with the surrounding environment, and, consequently, regulate the Qi level in your body. Two of these five centers are the Laogong cavities, and two others are Yongquan, used to regulate the Qi in the Kidneys. The fifth one is your face. The face is connected and related to many of your organs. Whenever any of your organ Qi is not normal, it shows on your face.