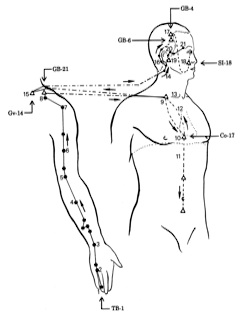 Therefore, the Upper Burner has been compared to a mist, which spreads the blood and Qi, the Middle Burner is like a foam which churns up food in the process of digestion, and the Lower Burner resembles a swamp where all the impure substances are excreted.

Regulating the Qi to a normally “smooth-flow” state is one of the main Qigong training methods for maintaining health. It is normally done through Wai Dan exercises, and it is believed that the Qi must flow around internal organs smoothly in order for them to maintain their normal functions. This means that in order to keep Qi flow smooth and the organs healthy, you must first learn how to regulate and relax muscles that are holding and related to a given organ. External movements also exercise internal muscles. One of the most common external exercises is regulating the Triple Burner by lifting your hands up above your head and then moving them down slowly. These up and down arm movements extend and relax the internal muscles and therefore increase Qi flow.

The Liver (Yin) and the Gall Bladder (Yang) are paired Organs. They correspond to Wood in the Five Phases, the direction east, the spring season, the climactic wind, the color green, the emotion of anger, the taste of sour, the odor goatish, and the sound of shouting. Their point of entry is the eyes. They control the sinews (muscles and joints), and their health is reflected in the fingernails and toenails. The main function of the Gall Bladder is storing and excreting the gall produced by the Liver. Together with the Heart, the Gall Bladder is responsible for decision-making.

The main disease related to the Gall Bladder is a disorder affecting the flow of gall, usually caused by Dampness and Heat. This is commonly manifested by pain in the region of the Liver, an oppressive sensation of fullness in the abdomen, and yellowish eyes, skin, urine, and tongue.

The Gall Bladder has never enjoyed serious attention during Qigong training. Its paired partner the Liver however, has received much more attention.

The Liver Channel of Foot—Absolute Yin

The Liver (Yin) and the Gall Bladder (Yang) are considered paired Organs. They correspond to Wood in the Five Phases, the direction east, the spring season, the climactic of wind, the color of green, the emotion of anger, the taste of sour, the odor goatish, and the sound of shouting. Their point of entry is the eyes. They control the sinews (muscles and joints), and their health is reflected in the finger and toenails.

The main task of the Liver is spreading and regulating Qi throughout the entire body. Its unique character is flowing and free. Therefore, depression or frustration can disturb the functioning of the Liver. In addition, the Liver is also responsible for storing blood when the body is at rest. This characteristic, together with its control over the lower abdomen, makes it the most critical Organ in regards to women’s menstrual cycle and sexuality.

Depression or long-term frustration can stagnate the Liver’s spreading function and result in continuing depression, a bad temper, and a painful, swollen feeling in the chest and sides. If this condition worsens, it may cause disharmony between the Liver and the Stomach and/or Spleen. This disorder is symbolized by the “rebellion” of Qi in the latter Organs, whereby Qi moves in the opposite direction than is normal. For example, the Stomach Qi normally descends; so rebellious Qi means hiccoughing, vomiting, etc. In the case of the Spleen, the Qi ordinarily moves upward, so rebellious Qi in this Organ means diarrhea.

Depression of the Liver Qi is the main cause of many women’s disorders, including menstrual irregularities, swollen and painful breasts, etc.

One of the most important responsibilities of the Liver is the storage of blood with intended emphasis upon nourishing and moistening. Whenever the Liver blood is deficient, the Liver will not be able to handle the function of moistening. This is generally shown as dry and painful eyes with blurred or weak vision, lack of suppleness or pain in moving the joints, dry skin, dizziness, and infrequent or spotty menstruation. If the Deficient Liver Yin has become serious, the conditions Rising Liver Fire or Hyper Liver Yang Ascending occur. These occurrences are evidenced in ill temper, restlessness, headache, vertigo, red face and eyes, and a parched mouth. If the Liver Yin is so deficient that it is incapable of securing the Liver Yang, many of the symptoms appear as disorders of the head. Weakness in the lower joints may also be manifested.

Important Points to Remember about The Twelve Primary Qi Channels

1. The Spleen, Liver, and Heart are the Organs with the most direct relationship with the blood. The Spleen filters the blood (modifying the blood’s structure), the Liver stores the blood, and the Heart moves it. Any problem associated with the blood will involve at least one of these Organs.

2. The Liver and the Kidneys are closely related. Their channels cross in many places. The Liver stores blood; the Kidneys store Essence. These substances, both of which are Yin, have a considerable influence on the reproductive functions.

3. The Heart (Upper Burner, Fire) and the Kidneys (Lower Burner, Water) keep each other in check and are dependent upon one another. The spirit of the Heart and the Essence of the Kidneys cooperate in establishing and maintaining human consciousness.