Use Neck Cranks or Chokes to Fight an Adversary | YMAA
Skip to main content
FREE Shipping Order Over $70. (US Only, Conditions apply)    |   Up to 40% Off. Exclusions apply.

Home >> Articles >> Use Neck Cranks or Chokes to Fight an Adversary 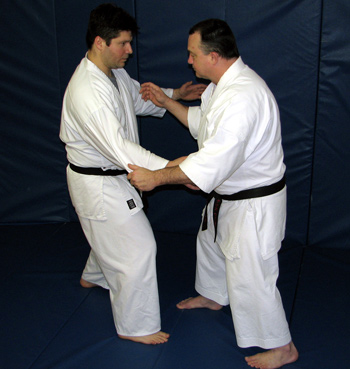 Use Neck Cranks or Chokes to Fight an Adversary

In single combat, we can confuse the enemy by attacking with varied techniques when the chance arises. Feint a thrust or cut, or make the enemy think you are going to close with him, and when he is confused you can easily win.

In single combat, we can confuse the enemy by attacking with varied techniques when the chance arises. Feint a thrust or cut, or make the enemy think you are going to close with him, and when he is confused you can easily win. This is the essence of fighting, and you must research it deeply.-Miyamoto Musashi

It’s important to have both a “standing” game as well as a “ground” game, as you never know where a fight will lead. Chokes and neck cranks are very effective, particularly on the ground, but also very dangerous.

Security guards generally don’t use these techniques. In many cases, the techniques are categorized by law enforcement as being at the same level as lethal force on the force continuum or banned outright by policy. The reason for this is the same reason that the guillotine made such an effective means of execution during the “Reign of Terror” that followed the French Revolution in the late 1700s. These are all methods of separating the control system (brain) from the supply system (heart/lungs) of the body, because they attack the neck, the “super highway” between these two systems.

Ways to Effectively Choke an Opponent

There are different ways to choke someone effectively. You must either close off his carotid arteries or compress his trachea.

The carotid arteries run down both sides of the neck. By restricting the blood flow in those arteries, you can impede the oxygen flow to the brain. After a short time in an oxygen-depressed state, the brain effectively goes to sleep. A carotid choke is relatively safe because if you let off shortly after the other guy loses consciousness, he should revive.

When that happens, it no longer has any control of the body. Brain goes to sleep, bad guy passes out, and you win. You can see this kind of thing happen in martial arts tournaments all the time. Medical intervention is rarely necessary. However, if you continue to compress the carotid arteries after the other guy has passed out, you can cause brain damage or death.

Compression of the trachea or the windpipe is another way of doing a choke. The trachea is on the front of the neck directly underneath the chin. You can stop or restrict the flow of air to the lungs by compressing the trachea. This causes suffocation, a condition that if left untreated will rapidly lead to unconsciousness, brain damage, and death. This is a more dangerous technique than a carotid choke, because you can damage the trachea in a manner that simply releasing the choke won’t often restart the flow of oxygen to the brain. Consequently, carotid chokes tend to be safer than tracheal chokes.

Architecture of the Neck

You can look at the neck as a pentagram. It has five points that are important for martial applications. The two-trapezium muscles at the back of the neck form the first two points and the carotid arteries form the second two points. The carotid arteries are located along side the sternocleidomastoid and the trachea. The trachea forms the fifth point.

The techniques listed here are those that we believe are the easiest to learn and apply using the forearms and hands.

Arms: When using the arms, it is helpful to think of them as propeller blades. Airplane propellers have a leading edge and a trailing edge. Look at the palm of your left hand. The edges of your arm, to the left and to the right are the leading and trailing edges that are used to perform the techniques. Those hard, bony edges give you solid leverage for performing chokes. The flat parts of your arms, directly in front of you and directly on the backside, are not used in these applications because they are softer and provide less mechanical leverage.

Hands: The grips you use with your hands are very important. The interlacing of the fingers, as if in prayer, is never to be used. Your fingers can be crushed and/or dislocated if you grip that way. The correct position is to clasp your hands together as if clapping, and then to grip a forefinger and thump around your opposite hand’s thumb.

Be Subtle While Applying a Choke

Being subtle while attempting a choke is the beginning of a path to success. Both authors, having trained with champion judoka Kenji Yamada, can attest to the subtlety that he used while choking.

Wilder says, “The first time Yamada Sensei choked me, I had no real concept of what was taking place. I wasn’t really able to feel his intention until he had the choke applied. I remember the technique too: it is called ‘The Hell Choke.” By the time I realized what was happening it was too late.”

Kane has had similar experiences. The first time he was choked-out in a judo tournament, he did not realize what the other guy was doing until he woke up afterward.

An attack to the neck is perceived as life threatening. While you might be choking to knock the other guy out, he is bound to think you are intent on killing him. Once he feels the choke, he is going to switch on his “fight or flight” reflex immediately and instinctively. You’ll be in for a wild ride. You need to be sneaky and subtle. Not showing your intent until it is too late is the key to getting a successful choke or crank begun.

Once it’s on properly, an untrained opponent will very unlikely get away from your technique until you choose to release him. An important ingredient in successful choking is control. In most cases, this means controlling your opponent’s hips with your legs. If you have a solid hold, he cannot buck you off of him or find some way to squirm away and break your chokehold.

In a standing choke, this might simply mean dragging him backward so that he cannot get his feet under him or achieve any leverage to take the pressure off and continue the fight. In groundwork, that typically means controlling his hips with your legs.