Violence Dynamics | YMAA
Skip to main content
FREE Shipping Order Over $70. (US Only, Conditions apply)    |   Up to 40% Off. Exclusions apply. 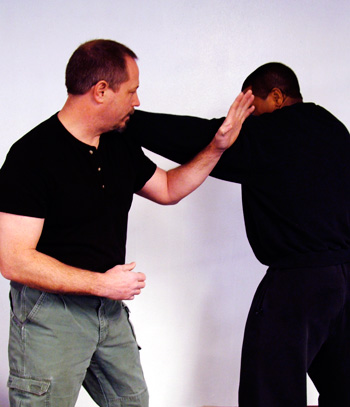 Bill and I were talking to the warden in an Iraqi prison, drinking chai. A gun fired. Other than ours and the warden’s bodyguards there shouldn’t have been loaded weapons in that section of the building. I put down my tea, stood and drew my sidearm. I started clearing the building.

Bill and I were talking to the warden in an Iraqi prison, drinking chai. A gun fired. Other than ours and the warden’s bodyguards there shouldn’t have been loaded weapons in that section of the building. I put down my tea, stood and drew my sidearm. I started clearing the building. Slow is smooth, smooth is fast.

Button hooking each door, scanning the room, “Clear!” Bill was right behind me. Everything seemed slow, but no one else began to react yet. I realized that nothing was happening. Hordes of well-armed militia were not pouring into the corridor. There was no second shot.

Animals are social creatures. Even as they broke out of the freeze one-by-one, they weren’t running away from the shot. Neither were they gathering around to watch. The behavior of the others told me long before I got to the end of the corridor that it was neither an assault, a gunfight, nor even a suicide. I knew it was an accidental discharge before I turned into the last room.

I cleared the weapon, comforted the poor guy in a language I barely understood and left it for the warden to handle.

Then I went back to finish my tea.

Understanding violence can be extremely complex. As a subject, violence could be said to extend from toddlers wrestling to boxing to rape to nuclear war. Self-defense, however, fits in a narrower range. You need to study the dynamics of the violence where self-defense is appropriate—criminal violence.

Generally, violence can be broken down into two very broad categories: social and asocial. Social violence is what, in the natural world, would be the types of violence common within a single species. This intra-species violence does not follow the dynamic or use the same tactics as violence against other species.

The dominance game of snakes wrestling or bears pushing and mouthing is not the same as the way the same species hunt prey. Social violence includes ritualized jockeying for territory or status. It also includes
acts to prove or increase group solidarity (a powerful side-effect of hunting as a team) and violence to enforce the rules and mores of the group.

Social violence can roughly be delineated as the Monkey Dance (MD), the Group Monkey Dance (GMD), the Educational Beat-Down (EBD) and the Status-Seeking Show (SSS).

Most, if not all animals have a ritualized combat between males of the same species to safely establish dominance. Snakes coil around each other and wrestle. It can look like mating to the uninitiated. Deer and elk lock antlers and push and fence. Rams slam their horns, reinforced with massive blocks of bone, into each other. Humans fist-fight or wrestle.

In all cases, it is a ritual with specific steps, genetically designed NOT to be life-threatening.

This human dominance game, the Monkey Dance, follows specific steps.  You have all seen it:

This description is simplified and shows only one side. It must be emphasized that there have been thousands of generations conditioned to play this game in this way. It is easy to get sucked in and a very difficult thing to walk away. Backing down from a Monkey Dance, unless you take or are given a face-saving out, is extremely difficult and embarrassing, especially for young men.

1) A hard, aggressive stare. The recipient will either look away or meet the stare. If he looks away,
dominance is established and the instigator will move on. If the recipient:

1a) meets the stare or

1b) tries to be dismissive (like saying to friends, “I think that guy has the ‘hots’ for me”),

either of which will likely cause the situation to escalate.

1c) It is possible, however, that the aggressor here is looking for or willing to settle for a Status-Seeking Show (SSS) in which case looking away, being submissive, may mark you as a good target. Also, any submissive body language increases your likelihood of being targeted by a predator.

2) If the stare is met and held, it will escalate to a verbal challenge, e.g., “What you lookin’ at?” Again, if the recipient at this point looks away and pretends to be very interested in something else,
dominance is established and the aggressor will likely move on. The recipient, especially if girls are watching, will have an incredible urge to respond in kind. It is, in fact, fear of being humiliated by not
responding that is driving the dynamic. The MD is not a game you play. It is genetically programmed and unless you possess wisdom and exert will, the game plays you.

2a) In order to defuse, the looking away must be submissive. It must be humble. If the recipient looks away but starts snickering with friends  or making low-voiced comments, the verbal challenge is repeated and escalated, “Hey! Asshole! I’m
talking to you!”

2b) If the recipient is not feeling submissive and is not mature enough to avoid the MD,

3) An approach, often marked by adrenalin-linked signs: gross motor activity of arm swinging or chest
bobbing; a change in color, usually with the skin flushing. 3a) At this point, other monkeys get involved.
Friends of both sides try to intervene, get between the two and prevent any further escalation. This is one of the best ways to have a face saving resolution. No one is injured, no one backed down. Status is not established but the willingness to fight for status has been, no matter how easy it was for bystanders to separate the dancers. This sets boundaries and allows both to co-exist with mutual respect, one of the main goals of the Monkey Dance.

3b) If one of the dancers is alone, he now has the face-saving exit in
that he is not backing down from the opponent, but from the group. If the lone person does not back down,

it is probably a special case and will likely end very badly.

3c) If no intervention is forthcoming, and again,
especially if girls are watching, things will escalate to step 4.

4) As the two square-off, there may be more verbal attacks and then one will make contact. It will usually be a two-handed push on the chest or an index finger to the chest. If it is an index finger to the nose (remember face contact, above) it will go immediately to Step #5. This pushing, with low-level contact can go on for some time.

5) A big, looping over-hand punch. At this point the fight, such as it is, will be on.

Get this—no matter who issued the verbal challenge, who pushed first or who threw the first punch there is no self-defense here. With all of the opportunities for preclusion, for not joining in the Monkey Dance, for simply leaving, this will be classified as a mutual combat fight. Both parties may go to jail. One certainly will if a serious injury results—even if it was from stumbling and falling.

The Monkey Dance is very much a male ritual. It is a contest for status between males. Women, generally, do not feel the male fear that others will see them as wimps for not playing. And guys, for the record most women see backing down as mature and not cowardly (with thanks to the movie, “Support Your Local Sheriff”.)

Very rarely a man will perceive himself to be in a Monkey Dance with a woman.  It indicates a man who has not been properly socialized at all, has likely picked a woman out of desperation to be of superior status to somebody and can become dangerously enraged if the woman is not submissive—and sexually predatory if she is.

The MD is almost always initiated with a person that the aggressor sees as close to his social level. In other words, a normal person will not follow the steps of the MD with a child. There is no status to be gained and the very idea that you thought that there might places you in a very low status.

Nor will a normal person MD with a very high-ranking individual, like a mob boss. Captains are constantly jockeying for influence, but they don’t do it with generals and only the very insecure do it with lieutenants. Middle management is a hotbed of one-upmanship and subtle challenges, but the middle managers don’t MD with the boss and the few that do MD with the line staff are the kind of managers that both make life hell and are the source of thousands of jokes.

The Group Monkey Dance (GMD) is a show of group solidarity. There are two levels, at least. In the lowest level an outsider is discouraged from interfering with group business—it is a way of establishing territory.

Families are tight-knit groups. Domestic violence incidents are acts within the group. Sometimes, when the police intervene, both parties turn on them. Even though one was a victim just moments before and in fear for her life, husband and wife, attacker and victim, often band together to drive away the outsiders.

This is behavior that is familiar in chimps and baboons—your tribe will band together to drive away or scare off members of another tribe or a predator. If you don’t play, your loyalty to the group might be questioned.

Most GMDs occur when an outsider is within the threat-group’s territory. There is an exception. You may remember the wildings in Central Park or the roving band of young men randomly beating people in Seattle. This pack behavior follows a similar dynamic and serves the same purpose as any other GMD—it strengthens bonds within the group. Causing fear in others (and fear is power) is just a by-product.

In earlier societies, this bonding-through-violence was ensured by hunting large game animals.