Violence: What Everyone Needs to Know About Fighting | YMAA
Skip to main content
FREE Shipping Order Over $70. (US Only, Conditions apply)    |   Up to 20% Off. Exclusions apply.

Home >> Articles >> Violence: What Everyone Needs to Know About Fighting 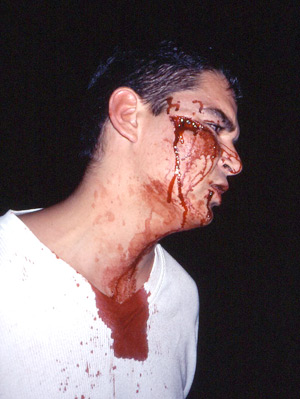 Violence: What Everyone Needs to Know About Fighting

According to the Bureau of Justice Statistics, men commit about 80 percent of all violent crimes in the United States, serious stuff like homicides, rapes, robberies, and assaults. Men are twice as likely as women to become victims of those same violent crimes, except for rape.

Bad Things Can Happen to Anyone

According to the Bureau of Justice Statistics, men commit about 80 percent of all violent crimes in the United States, serious stuff like homicides, rapes, robberies, and assaults. Men are twice as likely as women to become victims of those same violent crimes, except for rape.** Furthermore, males are more likely to be victimized by a stranger, whereas females are more likely to be victimized by a friend, acquaintance, or intimate. (Although when women engage in violence, they are more likely to assault someone physically they know than a stranger—which still leaves you in the crosshairs.) Consequently, while bad things can happen to anyone, males are the ones who really need to understand aggression and be prepared for sudden encounters with violence. That is why this was written especially for you. Let us make it clear; although we may present situations or vignettes from one gender's perspective, violence is an equal opportunity employer that knows no gender.

When it comes to violence, all the statistics confirm that younger people are far more inclined toward aggressive behavior than older people are. For example, many bars and most nightclubs are populated by younger people. Take an emotionally charged atmosphere, stir in a generous dose of alcohol and/or drugs, and you've got a good recipe for conflict and violence.

Young males tend to have a long list of things to prove, whether they are conscious of them or not. Often their motives are unconscious because they are based on biological patterns of the human species. You probably don't realize how much of what you think and feel is based on these patterns—and this especially applies to territoriality and status.

Young men typically do not truly understand or fully appreciate the physical, psychological, and legal costs of violence. They often feel immortal, never considering the possibility of becoming maimed, crippled, or even killed in a confrontation. Consequently, young men will fight for any number of reasons—affiliations, self esteem, social status, not to be considered a wimp, the clothes they wear, revenge for some perceived slight, to impress a cute girlfriend, or just to blow off a little steam, to name a few.

So, what do the participants of violence look like? Well, they look like you, the reader. You might simply find yourself in the wrong place at the right time. Perhaps some seemingly harmless behavior on your part will be the spark that sets things off, or you may be minding your own business and fail to notice impending danger until you walk into it unaware. Either way, it's a precarious place to be.

Our goal is to help you understand and avoid behavior that will get you involved in violence by giving you a roadmap to a conscious decision-making process that takes the non-thinking response out of your behavior. We will enable you to reach up into your head and flick the switch on the violence control panel from "react" to "respond." You need to ask yourself, "Is this really worth fighting over?" While in some instances, the response could legitimately be "Yes," more often than not, it ought to be "No."

Simply put, some yahoo spewing insults about your favorite sports team is worlds apart from a drug-crazed lunatic coming at you with a knife in a parking lot. There is a large gray area between those two extremes where hard and fast rules don't always apply. This is where wisdom, oftentimes hard-earned wisdom, is the difference between a good decision and a bad one. It's not always a life or death decision, yet a bad choice could have serious consequences, the kind of stuff that can change a life completely, for the worse.

What IS Really Worth Fighting For?

Recognize that every time you engage in violence, no matter how small and trivial, it has the potential of escalating into something that has life-long consequences. What is really worth fighting for when you might end up spending the rest of your life behind bars with a sociopathic roommate, dreading the moment you might accidentally drop the soap in the shower, confined to a wheelchair peeing through a catheter and sh*tting into a colostomy bag, or declaring bankruptcy under the crushing weight of a massive civil lawsuit?

What if it's not just one guy who's messing with you but rather a gang of thugs? What about fighting to protect a pregnant woman or disabled friend who cannot get away from a hostile individual? What if he's got a knife or a gun? What if it's your intoxicated brother or your drugged-up best friend pointing the weapon at you with malevolence in his eyes? These are all situational; they are decisions that without forethought could, and most likely will, be poorly made.

What You Are Willing To Do, Or Have Done To You?

We hope to give you a strategic view of what is happening, a view that is more practical than emotional. It is then up to you to establish a goal and to adhere to tactics that serve that goal. An example of establishing these goals comes from a police officer friend of ours. Long before encountering violence, he had already built an internal list of things he simply will not allow in his world. An example is, "I will not allow myself to be tied up." He knows from experience and training that being tied up is a precursor to being moved to a secondary crime scene or killed outright. For him, physical restraint by a criminal means certain death. In his mind, it is far better to fight now and have some chance of survival than to comply and face near certain slaughter later on. How would you respond to that type of scenario? It is not only useful, but also critical, to determine what you are willing to do, or have done to you, during a violent encounter, in advance of such incidents occurring. That way, during the heat of the moment, you can act without hesitation.

**Almost 90 percent of reported rapes are perpetrated against female victims, though the rate of reporting by males who were sexually assaulted is thought to be very low, so that number might be a bit skewed.

This article is an excerpt taken from the book The Little Black Book of Violence - What Every Young Man Needs To Know About Fighting by Lawrence Kane and Kris Wilder.