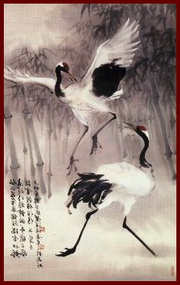 The Crane is a weak animal without much strength to use in fighting. However, when necessary, it can defend itself very effectively. A Crane defending itself relies on only three things: the ability to jump, the breaking power of its wings, and the pecking of the beak.

Jumping is used to dodge an attack and also to approach the opponent for its own attack. When a Crane uses its wings to strike, it can generate enough power to break a large branch. The key to this kind of power is speed. Remember that even though water is soft, when squirted out fast enough it can be used in place of a knife in surgical operations. Finally, the speed and accuracy with which a Crane can peck with its beak is very effective for attacking vital areas. This survival skill is useful in another way, because the Crane uses its beak to catch fish. Next, I would like to summarize some of the key points together with some of my past thirty-five years of White Crane experience.

1. Southern White Crane is a Soft-Hard Style. For a beginner, the training tends more toward the hard side. It is commonly known that the external styles train from external to internal and from hard to soft. The reason is that it is easier to be hard instead of soft. Not only that, in order to use the soft to defend yourself, you must understand the theory of Listening Jin (i.e., skin feeling and sensing), Understanding Jin, Following Jin, Sticking Jin, Adhering Jin, and Coiling Jin. Then, you must know how to apply the theories of each into practice. However, the most critical aspect of using soft against the hard is that you must know how to cultivate the internal Qi to an abundant level and be able to lead the Qi to energize muscular power with your concentrated mind. In order to reach this goal, it will usually take more than ten years of pondering and practice. Naturally, it is not easy for a beginner to learn these highly secret levels of the art.

Normally, in an external style, a master will teach a student how to use the concentrated mind to generate local Qi, such as in the arms, and use this local Qi to energize the muscular power to a high level. This kind of Qigong is classified as External Elixir (Wai Dan). From this training, the martial techniques can be taught and immediately applied for both defense and offense. This procedure was necessary in ancient times, when self-defense techniques were critical for surviving in martial society. Only after an external martial arts beginner reached a high level of skill would the master slowly introduce him to the way of meditation. Through meditation, the Qi is built up to a more abundant level in the Lower Dan Tian. This kind of training is classified as Internal Elixir (Nei Dan). Normally, the first step of Internal Elixir training is Small Circulation (Xiao Zhou Tian). Through Small Circulation practice, not only can the Qi be stored in the Lower Dan Tian at a higher level, but it can also be circulated in the two most important Qi vessels, the Conception and Governing Vessels.

Finally, Grand Circulation (Da Zhou Tian) is taught to the student. Through Grand Circulation practice, a student will learn how to lead the Qi correctly to the limbs, or any part of the body, to energize it to the highest level of Jin manifestation. In order to mentally lead the Qi to circulate smoothly and freely in the body, the physical body must be relaxed. A tense body will make the Qi circulation stagnant. Because of this, the body must remain soft.

Therefore, when a high level White Crane practitioner manifests Jin in his practice or in battle, the physical body is very soft at the beginning while the Qi is led to the limbs to energize the muscles for action. Once the power reaches the opponent, then the physical body is tensed suddenly. Again, this is why White Crane is called a Soft-Hard Style.

From this, you can see that the internal or the soft side of White Crane training, both in theory and practice, is the same as that of other internal Chinese martial styles. The reason for this is that it does not matter how a style was developed, it must follow the “Dao” (Natural Way). I will explain the Dao of Qigong theory later.

The beginning sequences of White Crane training, such as Jiao Zhan Quan (Angle Battle Fist), San Zhan Quan (Three Battle Fist), and Qi Xing Quan (Seven Star Fist), are harder in their training. While the very soft ones, such as Shan He Quan (Fan Crane Fist) and Hu Die Zhang (Butterfly Palm), are extremely soft like Taijiquan. Many other sequences are a combination of soft and hard, and are trained for actual battles, such as Ba Mei Shou (Eight Plum Hands), Z’ong He Quan (Jumping Crane Fist), and Shi Ba Luo Han Shou (Eighteen Luo Han Hands).

In the White Crane sequence training, a firm root is the first requirement. How to generate the different Jin patterns from the waist with the coordination of the breathing is the most critical aspect of the training. Normally, it will take many years for a beginner to grasp the essence of Jin manifestation. It is only after a Jin is manifested correctly and powerfully that the techniques derived from each Jin pattern are explained by the master. Generally, each Jin pattern includes four possible categories of martial arts applications: Kicking, Striking, Wrestling, and Qin Na. Again, there are several possible techniques in each of these categories.

In addition, speed training is heavily emphasized because it is believed that, without good speed and power in the Jin manifestations, even if you know many techniques, they will be useless. Therefore, speed and power have become the most important parts of training at the beginning levels.

3. The spine and chest movements are the most important. It is believed that the reason that long-distance flying birds, like migratory birds such as the White Crane or sea fowl, can fly long distances is because when they fly, they move their chest in coordination with their wings. Because of this, they use their body to execute the majority of their flying. This is different from local birds, such as the sparrow, who use their wings alone to carry their body and therefore cannot fly long distances. Naturally, when long range flying birds are fighting, they generate power from the center of their body and from their chest.

However, let us analyze Jin generation from the martial point of view. Theoretically, as long as there is a joint which allows you to bend and then straighten, then it is considered a bow. These bows are constructed from the muscles and tendons in the joints. Through contraction and extension, the bow is able to generate power. In our body, there are two large bows which are constructed from the two biggest muscle and tendon groups. These two bows are the torso and the chest. If you look at the body’s structure, you will realize that through the contraction of the torso and chest muscles, you are able to pull, push, lift or do heavy work. Once you have injured these two bows, your power will be significantly reduced. Again, if you look at Olympic athletes who throw the javelin or discus, in order to generate great throwing power, the torso and chest must be skillfully applied to the movements.

In order to generate strong Jin for fighting, these two bows are emphasized in all Chinese martial styles. This is the same in Southern White Crane. Southern White Crane specializes in the training of the torso and the chest. We can see this from the White Crane Qigong training, in which the spine and the chest movements are the main focus. Through White Crane Qigong training, a practitioner will learn how to rebuild his spine and chest from weakness to a stronger level. This includes the muscles, tendons, and also the ligaments. Only after a practitioner has mastered the Qigong movements and coordinated it with his breathing, Yi, and Qi, can the Jin be manifested with the coordination of other, smaller bows such as the shoulders, elbows, and wrists to manifest the Jin to its maximum potential.

You should understand that in order to have strong Jin, you must have a strong physical body (Yang) and an abundant level of Qi (Yin). The physical body is like a machine and the Qi is like electricity. If either one is missing, the power will not be strong. Therefore, in White Crane you are training to generate power from the waist’s jerking or shaking, and from this shaking, through the spine and chest, the power trembles outward and becomes the Jin.

Often, a White Crane beginner or a practitioner from another style only knows how to tense the muscles and tendons of the spine and chest without knowing how to relax them. It is common in this situation that the spine ligaments, the joints, or the muscles are damaged. This is commonly seen in Karate styles in which the tension of the torso is heavily emphasized.

4. Southern White Crane specializes in short and middle range fighting. As we have already seen, Southern White Crane developed in the south of China. Due to the background explained earlier, its hand techniques are highly developed. Normally, in northern styles, it is said: “Hands are like two door fans, raise the leg to kick the opponent.” This means that the two hands are like two pieces of a Chinese door which is used mainly to close for blocking. The key attack originates from kicking. However, in southern styles it is said: “Feet not higher than knees”. This means that when the southern styles are initiating a kick, the target is usually no higher than the opponent’s knee. This implies that Southern Styles emphasize low kicks instead of high kicking techniques.

Because of the above reasons, normally when a White Crane martial artist fights, he or she will stay at long range from the opponent. When the timing is right and the situation allows, he or she will move rapidly into the middle and short ranges and take the advantage of skillful hand techniques to fight. Right after the attack, he or she will jump back to the long range immediately to avoid being grabbed. Since the Crane is a weak animal, once it is grabbed it will have little chance to escape. In order to fill this void, Crane stylists specialize in wrestling and Qin Na (seizing and control) techniques to deal with the problems of being grabbed. In fact, White Crane is considered one of the most well known styles which has expertise in Qin Na.

When White Crane training has reached a high level, the techniques of listening, following, sticking, adhering, coiling, and controlling become important. It is no different from Taijiquan, which emphasizes the same criteria and expertise in short and middle range fighting.

5. Defense is used as offense. Because the Crane is a weak animal without the advantage of strength, it has to use defense as its offense. It must be calm, quiet, and steady, but also alert and ready to attack. When the opportunity comes and the timing is right, an attack is executed in the blink of an eye. The strategy of the Crane is therefore to protect itself and wait for the opportunity to attack.

To conclude, Crane training focuses on keeping the proper distance, with jumping or moving, and speed and accuracy in attacks to vital areas. 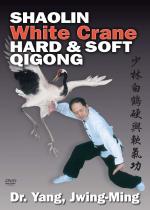