Wicked Words that May Kill You | YMAA
Skip to main content
FREE Shipping Order Over $70. (US Only, Conditions apply)    |   Up to 20% Off. Exclusions apply.

Home >> Articles >> Wicked Words that May Kill You 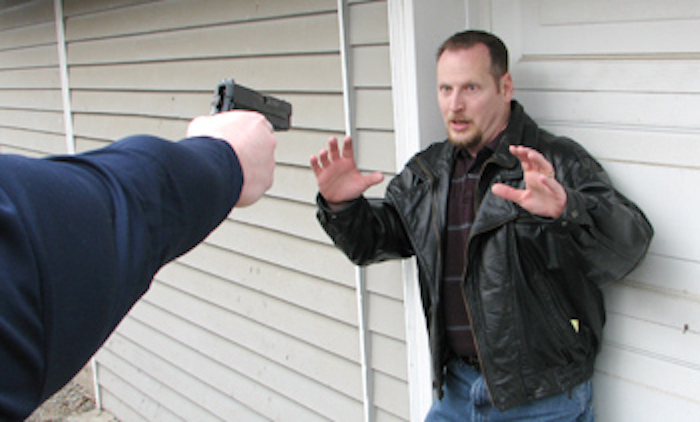 Wicked Words that May Kill You

While sticks and stones can break your bones, your words may actually kill you. They can also save your life. Having to be right despite the cost, reacting indignantly in the face of a threat, or insulting an adversary often guarantees that a conflict will escalate to violence.

While sticks and stones can break your bones, your words may actually kill you. They can also save your life. Having to be right despite the cost, reacting indignantly in the face of a threat, or insulting an adversary often guarantees that a conflict will escalate to violence. Clever words, on the other hand, can de-escalate a tense situation, stave off bloodshed until help arrives, momentarily distract an opponent to facilitate your counterattack and escape, or create sympathetic witnesses who will testify on your behalf.

Famous last words will kill you

On Jan. 27, 2005, actress Nicole duFresne was robbed at gunpoint by 19-year-old Rudy Fleming who stole her friend's purse and pistol-whipped her fiancé. What was supposed to be a simple property crime turned tragic when the 28-year-old actress confronted the teenage robber. She became furious, shoved Fleming, and snapped, "What are you going to do, shoot us?"

She died shortly thereafter in her fiancé's arms.

There's a tremendous difference between dealing with a robber who wants your stuff verses a predator who's wants to rape, maim, or kill you. It's paramount to respond accordingly. Giving your vehicle to a carjacker, your wallet to a robber, or your apology to someone who tries to start a fight hurts a lot less than eating a blade or a bullet simply because you refused to back down.

The duFresne tragedy is a textbook example of what not to do when confronted by an armed aggressor. Having to be "right" despite any cost tends to escalate conflict in most any environment, but mouthing off to any street punk is especially dangerous. Robbers are already breaking social norms when they threaten you, so it's ludicrous to assume that they will react in a civilized manner if you push back. Save your righteous indignation for a safer environment. Don't let your ego overrule your common sense.

Similarly, if you are in error about something admit it. Honesty is a much better way to de-escalate a bad situation than lying or stubbornly refusing to acknowledge a wrong. If you find yourself taking things to a personal-level, spewing insults, you are deep in your monkey brain (to borrow a phrase from author Rory Miller). This means that you are operating from emotion rather than logic. Not only is the argument no longer about the real or perceived error, but also you are pushing matters toward violence; and doing so in a way that precludes a legitimate claim of self defense since you are part of the problem. It is tough on the ego to apologize, but it beats the alternatives.

Even if you cannot de-escalate a situation simply by talking, clever words may enable you to stall until help arrives or the attacker changes his mind and leaves. You may be able to scare the other guy off or gather strategic intelligence that will help you in a fight. As long as you can keep the other guy talking, he's not physically assaulting you.

You can also use conversation as a psychological weapon to increase your chances of surviving as well as to create openings for your physical defenses. Deception, for example, is but one of the tactics you might choose to employ. Any convincing distraction you can create will be to your advantage, such as shouting for nonexistent friends. There is strength in numbers and in making an aggressor believe you are not alone.

If you realize that de-escalation is not working and believe that you will have no other choice but to fight, it may also be possible to cause your opponent to make a mental twitch, providing a moment of opportunity to counterattack while he mentally shifts gears. This twitch is brought about by dissonance between what the person expects and what you actually say or do. Ask something completely unexpected like, "What time is it?" or something really odd like, "What was Gandhi's batting average?"

Cognitive dissonance is powerful. During the opponent's momentary confusion, you will have an opportunity to act. Similarly, if you can hit an aggressor while he is talking, it takes about half a second for him to switch gears mentally from communicating to fighting.

If things get physical, you must not only win the fight, but also the aftermath. What you say before, during, and after a confrontation holds a lot of weight in convincing witnesses that you're the good guy. It is pretty easy to shout, but hard to verbalize during a fight. The challenge is finding words that put you in the best possible light and your assailant in the worst. Start by acting afraid, verbally calling for help.

This cannot be overstated. In her book, Witness for the Defense, Dr. Loftus relates, "The danger of eyewitness testimony is clear: Anyone in the world can be convicted of a crime he or she did not commit, or deprived of an award that is due, based solely on the evidence of a witness who convinces a jury that his memory about what he saw is correct."

Unfortunately memory is notoriously unreliable. Research indicates that mistaken eyewitness identification accounts for about half of wrongful convictions in the United States. Video evidence can ameliorate the problem, but you cannot rely that the incident will be captured.

Shouting something along the lines of, "Oh my God, don't kill me with that knife!" is a pretty good indicator of peril. It clearly differentiates who the bad guy is and can help you justify countervailing force in a court of law. "Put down the weapon," "Please don't hurt me," "I don't want to fight you," and "Help, he's got a gun" all put you in a much better light than "Go ahead, make my day!" or "I'm gonna kill you sucker!" Think about various scenarios ahead of time so that you will have a better chance of articulating strategically.

Words are a double-edged sword

For better or worse, your words are a weapon. The challenge is that they can hurt you just as easily as they can harm your adversary. Use them wisely.