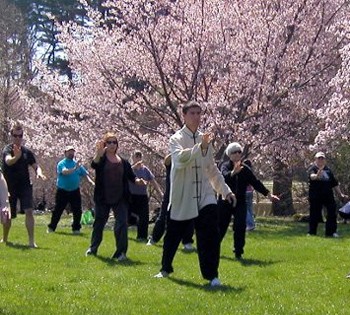 It’s open house across the world, beginning in New Zealand, when World Tai Chi & Qigong Day will spread time zone by time zone across the globe through 60 countries and across six continents. There will be events in cities, towns, and villages world-wide embracing wisdom from all cultures of the world.

It’s open house across the world, beginning in New Zealand, when World Tai Chi & Qigong Day will spread time zone by time zone across the globe through 60 countries and across six continents. There will be events in cities, towns, and villages world-wide embracing wisdom from all cultures of the world. Twenty-four hours of a slow and relaxed meditation and exhibitions will travel around the world beginning at 10 a.m. on Saturday, April 24. This year marks the 12th anniversary of the day, organized by founder Bill Douglas, a 2009 Internal Arts Hall of Fame Inductee.

Tai Chi and Qigong practitioners, both students and teachers and those with just an interest, will commit themselves to perform, demonstrate, train, and study Tai Chi and Qigong forms and exercises for one hour. Those committed will perform in their local parks and public places so the community can watch and learn more about this martial art form.

What is Tai Chi?

Dr. Yang, Jwing-Ming, in his newest book Tai Chi Chuan Classical Yang Style—Revised, (June 2010, YMAA), he states that “Taijiquan (Tai Chi) is a slow and relaxed moving mediation. Through practicing Taijiquan, you are able to calm down your mind, locate your spiritual center, and consequently find your being. Moreover, from the relaxed moving exercises you can bring your body to an ultimate level of relaxation and natural ease. This can result in smooth Qi (inner energy or bioelectricity) and blood circulation. This is the key to maintaining health and recovering from sickness.”

Through the practice of Tai Chi Forms, a practitioner can improve overall health. Tai Chi has been found to aid in the healing of many ailments. A study from the Harvard Medical School in 2009 found some interesting facts about the benefits of Tai Chi.

Through the performance of Tai Chi forms, a practitioner can improve their overall health with remarkable improvements in balance, flexibility, and reduced bone loss. The Sunset Tai Chi form designed by Ramel Rones has been adopted by the National Institute of Health (NIH) in a study on the health benefits of tai chi for fibromyalgia, a stress-related disease.

On Saturday, April 24, 2010 at 9:30 a.m. you are invited to join a free YMAA Tai Chi and Qigong group practice at the Arnold Arboretum, 125 Arborway, Boston, Mass. All are welcome to join with any level of experience. Just bring comfortable clothes and lots of Chi ;). Also feel free to bring your dog, kids, Frisbees, and whatever you feel is appropriate for a spring day outdoors. There are some restrictions at the Arnold Arboretum: No food or beverages, pick up after yourself, and please care for the plant life.

At 10 a.m., Nicholas Yang, president of YMAA International, will lead the practicing of the Yang-Style Taijiquan forms following the tradition of World Tai Chi & Qigong Day. He will also lead some simple Qigong Exercises for Health and Pushing Hands.

“World Tai Chi & Qigong Day helps to bring awareness and knowledge about the ancient practice of Tai Chi, Qigong, and eastern Asian arts,” said Yang, “It is a great opportunity for newcomers to learn exactly what Tai Chi and Qigong are all about. It also helps to bring together the existing martial arts community, including practitioners of all levels,” Yang also said it was good to know that the community is out there participating together as one, letting the world know about this amazing martial art form.

YMAA Andover will also be hosting a free World Taiji & Qigong Day event, at Yang's Fitness Center, in the parking lot behind the building at 5 Dundee Park, Andover, Mass. The event will begin at 10 a.m. and will include Qigong, Taiji, open practice, demonstrations, informal hands-on sessions and time for questions. It’s an open invitation to those who are curious about Tai Chi and want to learn more or for seasoned practitioners from any school using any style.

Dr. Kuhn serves as president of the Tai Chi & Qi Gong Healing Institute, a non-profit organization and is the director of Chinese Medicine for Health, a clinic based in Holliston, Massachusetts, which is dedicated to healthy lifestyles through alternative and natural medicine. She is also author of Simple Chinese Medicine—A Beginner’s Guide to Natural Healing & Well-Being.

For further information about the event or how you might participate, visit your nearest YMAA School or the World Tai Chi Day website.

Barbara Langley is the National Publicist for YMAA Publication Center, Inc. She is the editor of Taekwondo—A Path to Excellence by Doug Cook, Oct. 2009. She has written numerous newspaper and magazine articles as well as a weekly business column. She is the recipient of several public relation awards.