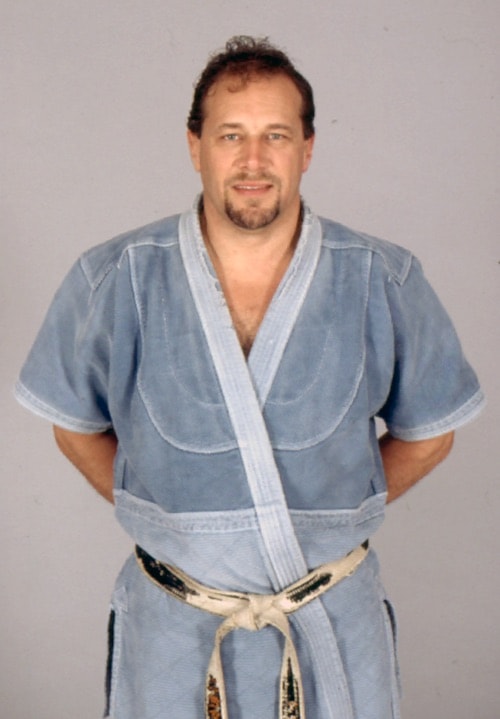 It was 1971 when Mr. Arsenault began his martial arts training in North Bay, Ontario under the watchful eye of Sensei Duane Sawyer in Kenshokan Dharma, Goshin Jutsu. At this time, he had yet to hear of Bruce Lee who became a screen idol in the early 70s and started the Kung Fu craze here in North America.

He knew about the existence of judo, as it was an Olympic sport. Karate was just a word that he associated to a newly introduced fighting style and kung fu was relatively unheard of.

Mr. Arsenault threw himself intensely into karate during his university years (1972-78) at McMaster University in Hamilton, Ontario. He attained the rank of first kyu brown belt in Eastern's rough and tumble Goju Ryu Karate. After dabbling in Chito Ryu karate and obtaining his teaching degree at Queen's University in Kingston, he moved to Vancouver, British Columbia.

He joined the Vancouver Police Department in 1979, a career he continues today. In Vancouver, he met Master Wong, Yuwa his karate instructor, or colleague as Yuwa now wishes to be called, and the true essence of karate unfolded under his expert and humble tutelage. Al was awarded his 3rd degree black belt from Dr. Wong in 1986. Al had never known such a technically brilliant yet utterly humble martial artist before. Master Wong encouraged his students in Nisei Karate-do to study all facets and styles of the martial arts and to utilize only what was useful for our temperaments and body types. Indeed, it was because of this freedom that one of Yuwa's long time karate students, Michael Levenston, came to study T'ai Chi Chu'an (Taijiquan) with Master Liang, Shou-Yu. In 1989, Michael introduced Master Liang to Yuwa and Al as being a 'living treasury of martial arts skill and knowledge'. Master Liang proved to be indeed just that. Al stopped teaching karate, preferring to train with Master Liang. Soon the concept of Wushu Sanshou Dao was born in a gym at the University of British Columbia, where the few of them trained together (see early training photo). Sanshou Dao is basically the hybridization of the extensive and collective knowledge of these two masters with Michael and Al assisting in the meshing process whenever they could. This process still continues to grow worldwide today as they seek new skills to absorb into the slowly evolving sanshou style.

As his experience in the martial arts and street policing grew, Mr. Arsenault became interested mainly in the practical applications of the martial arts. He fought continuously with the students in his club despite a chronic back problem. Now at 50 years of age he still enjoys vigorous workouts. He obtained his black belt in judo under Tim Laidler, Brian Shipper, Toby Hinton and Wes Fung who head the Vancouver Police Judo/ Jiu Jitsu Club and he serves as an assistant instructor at this club. Al is actively involved in teaching his fellow officers about police restraint and control tactics (within the judo club), he was a founding member of a Crowd Control Unit and he has been used extensively by the courts as an expert in non-firearm weaponry over the last two decades.

Today, he is also beginning to explore the creative side of his personality through writing and visual arts such as 'Odd Squad' filming of documentaries and educational videos like 'Through a Blue Lens' [1999], 'Flipping the World' [2000] and 'Beyond the Blue Lens' [2004] (see www.oddsquad.com).

Cst. Arsenault has had to arrest many violent offenders throughout the course of his career as a police officer. He has learned to read pre-assault cues and with the utmost speed, take the fight to his would-be assailant and put him quickly down to the ground without causing unnecessary harm. He likes to say that 'there is a time for talk and a time for action'. Not knowing the difference could mean a trip to the hospital to treat his injuries or to police Internal Affairs to explain his actions. He has always fought smarter, not harder and he only fights when he has to. Cst. Arsenault has chosen to stay exclusively on the street as opposed to taking the softer inside 'desk jockey' positions. A 'carpet cop' he is not. He takes pride in being a 'career constable' and being up to his elbows in the seedy and often violent part of society (in Vancouver's notorious skid road- the Downtown Eastside) where drug-induced human misery and surviving by instincts are the norm.

Having said this, Al advocates for a strict code of non-violence to his students other than for reasons of self-defense. If they must fight a righteous and unavoidable battle, he teaches them that there is no 'fair' fight, only personal survival. The amount of force they use must be proportionate to the amount of force used against them, in accordance with our laws. With such a training environment, few bullies or hot heads are attracted. These types soon leave or are shown the way out. And so our students must learn the distinction between self-serving violence and the judicious application of force for the common good of all.

For over a decade, Al has served as the President of the International Wushu Sanshou Dao Association that Master Liang, Shou-Yu, Dr. Wong, Yuwa and Dr. Yang, Jwing-Ming formed in 1988. In 1997, Master Liang awarded Al a 5th degree black belt in Sanshou Dao, a degree that is humbly acknowledged as being largely an honorary one. The SYL Institute in Vancouver is immensely popular and our students successfully compete internationally. Indeed, Master Liang has a large contingent of both local (see group photo) and international students. Sanshou Dao has spread to China and elsewhere, taking on the flavors of other styles of martial arts to give it additional strength and depth.