The Juji Gatame Encyclopedia: Comprehensive Applications of the Cross-Body Armlock | YMAA
Skip to main content
FREE Shipping Order Over $70. (US Only, Conditions apply)    |   Up to 20% Off. Exclusions apply. 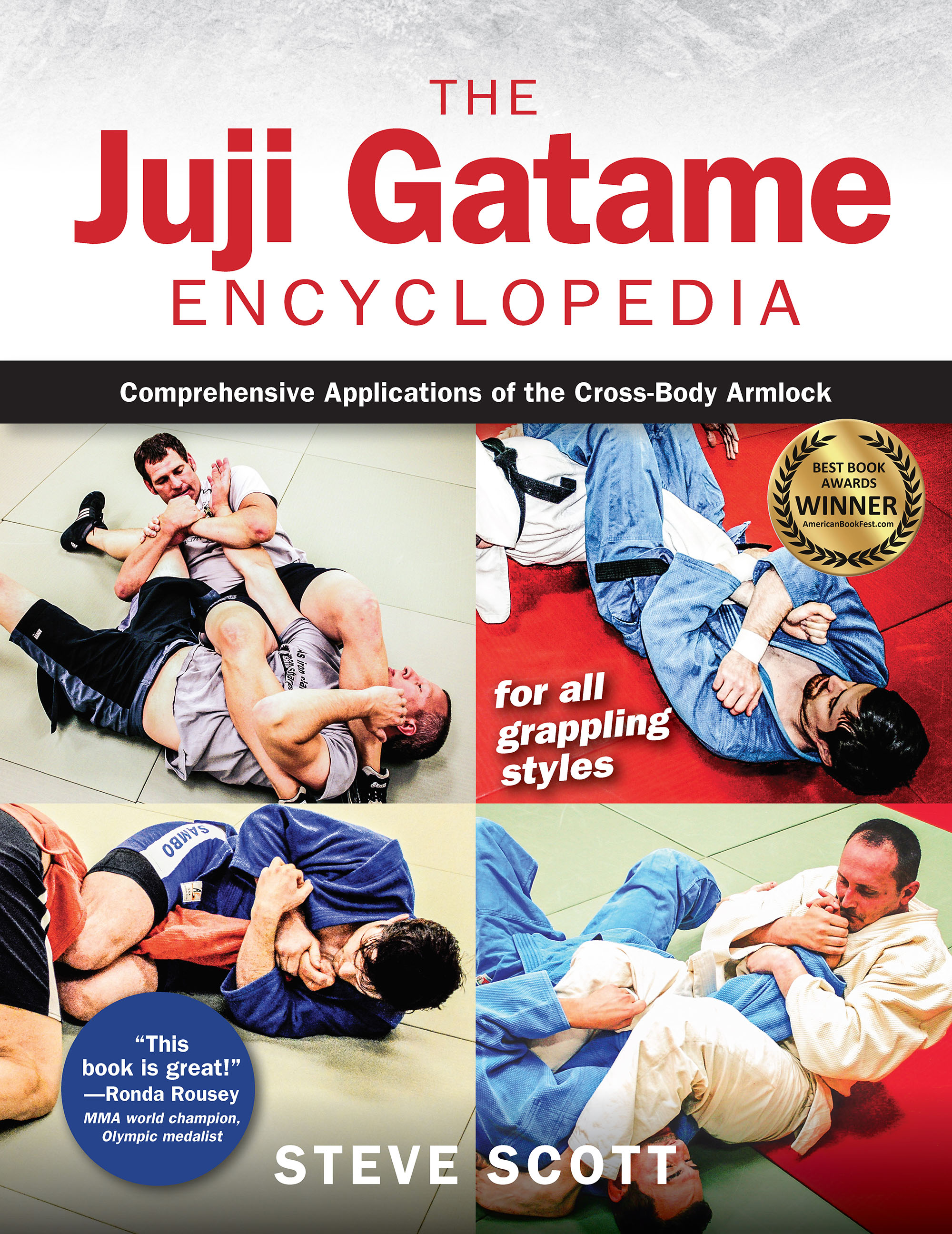 The Juji Gatame Encyclopedia: Comprehensive Applications of the Cross-Body Armlock

Juji gatame is the pinnacle of armlocks. It remains the most consistently used joint lock in many grappling sports including judo, sambo, jujitsu, submission grappling, BJJ, and MMA. Athletes and coaches around the world use and respect this game-ending armlock.

Audiobook purchase options with our partners.

Juji gatame remains the most consistently used joint lock in many grappling sports including judo, sambo, jujitsu, submission grappling, BJJ, and MMA. Athletes and coaches around the world use and respect this game-ending armlock.

Juji gatame was not widely popular until the 1960s, when the sambo grapplers of the former Soviet Union began their innovations with Japanese armlocks and groundfighting. With great success, they took their opponents to the mat, submitting them with never-before-seen applications of juji gatame techniques.

Steve Scott carefully breaks down the basics, analyzes the structure, and offers hundreds of variations so you can successfully win with juji gatame, even under stress.

“This book is great. If it weren’t for the armlocks shown in this book, I’d still be working the graveyard shift as a night clerk in my local gym. This book goes into a lot of detail about the cross-body armlock. I recommend it!”

“Steve is one of the foremost authorities on juji gatame in the world. This book reflects Steve’s pragmatic and realistic approach to teaching. Whether you are a world-class fighter or a novice in any fighting sport or martial art, you will benefit by studying this book.”

“Juji gatame is one of the most effective submission techniques ever invented, and Steve’s book truly is an encyclopedia on this armlock. This book represents years of training, research, and coaching at the world-class level.”

US national champion in judo and sambo

“If you stretched an opponent’s arm, they never forget you were the one who made them tap out. Juji Gatame Encyclopediais a wealth of information on winning with juji gatame.”

“Perhaps the quintessential submission hold that crosses boundaries between judo, sambo, jiu-jitsu, catch wrestling, and the myriad of other grappling styles practiced today is the armbar, or juji gatame, as it is known in judo. Regardless of the diverse opportunities that exist today for competitive grapplers, they all allow for armbars. Inasmuch, the armbar is without a doubt a universal joint lock that all grapplers must refine. As many competitive venues as there are for armbars, there are equally astounding numbers of juji gatame attack variations. Steve Scott has achieved no small feat with the Juji Gatame Encyclopedia. Anyone interested in advancing his or her armbar game must have this book in their collection.”

“As a long-time martial artist, I was thrilled to read Steve Scott’s Juji Gatame Encyclopedia. Scott is a master grappler, and it shows in the more than 400 pages of his excellent book on the world’s most popular and functional armlock—juji gatame. This well-written and photo-rich book covers an amazing amount of information on this armlock, including numerous examples of the four basic entries, many details about how to trap and lever the arm to straighten it for the armlock, various techniques to escape from juji gatame, and much more. I particularly liked how he goes into great detail with his insightful captions for the many technical photos. His book is an invaluable lifelong reference for juji gatame, for both combat sports and self-defense.

“Steve Scott’s knowledge of juji gatame really can, and does, fill an encyclopedia! TheJuji Gatame Encyclopediais the preeminent work on the straight armlock. It is an all encompassing and concise examination of juji gatame. Whether you are a judoka, a jiu-jitsu practitioner, or a sambist, this book will enhance your game.”

Coach of many national and international sambo champions

“Steve’s book is terrific! His real-world knowledge of how to stretch an arm in juji gatame makes this book worth buying and reading.”

US national champion in judo and sambo

“I can’t count the number of times I’ve told my students that there are many variations of the locks I teach, and even more entries to get to the locks. Steve Scott doesn’t just say this; he illustrates it with the Juji Gatame Encyclopedia. This incredible tome focuses on one topic and one topic only: the cross-body armlock, or juji gatame in Japanese.

“Steve Scott sets out to show how the cross-body armlock is multifaceted in its applications and how this versatile and functional technique has many applications beyond what most people practice. He definitely achieved his goal, as this comprehensive text is the most exhaustive study available of this popular technique. If you want to go beyond learning how to execute juji gatame and truly understand and master this formable technique, study this encyclopedia and practice all the setups, entries, rolls, turns, and applications, including the subtle differences you will find among some of those variations. Do this, and this guide will truly help you master this technique.”

Author, Survive a Shooting, Hard-Won Wisdom from the School of Hard Knocks, How to Protect Yourself by Developing a Fighter’s Mindset, and other books