Attack Drills Bundle | YMAA
Skip to main content
FREE Shipping Order Over $70. (US Only, Conditions apply)    |   Up to 20% Off. Exclusions apply. 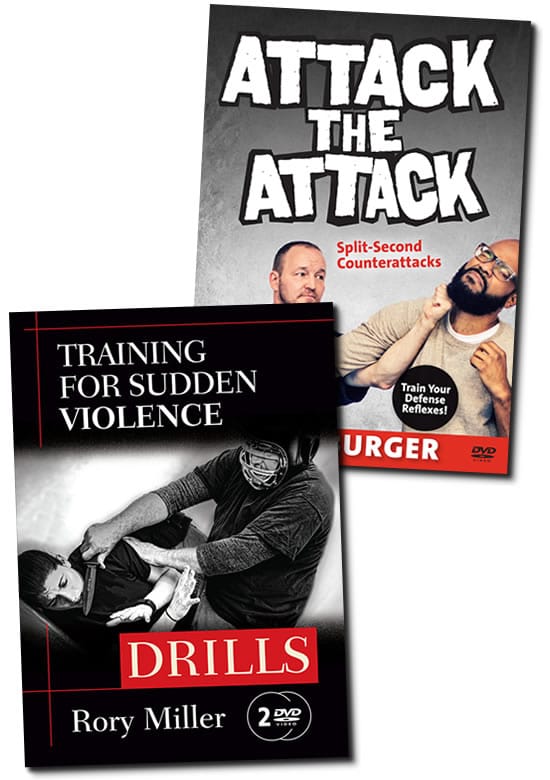 In Attack the Attack, Coach Jeff Burger teaches you to instantly defend yourself and inflict maximum damage at the same time, using dozens of proven techniques.

This modern principles-based system of defense includes the defensive progression: a chronological breakdown of the attack and all possible outcomes. You will analyze your beat efficiency and determine how many blocks and strikes it takes to complete the task. You’ll learn about the OODA loop (observe, orient, decide, and act)—the neurological steps you go through when reacting.

With Attack the Attack you’ll learn the following:

Whether you are a beginner or an experienced martial artist, you will develop a proper mind-set and exceptional self-defense reflexes.

Training Drills to Prepare for the Worst

The speed and brutality of a predatory attack can shock even an experienced martial artist. The sudden chaos, the cascade of stress hormones—you feel as though time slows down. In reality, the assault is over in an instant. How does anyone prepare for that?

“You don’t get to pick where fights go,” Miller says. That’s why he has created a series of drills to train you for the worst of it, that will challenge you in ways that mere physical training does not. You will defend yourself on your feet, on the ground, against weapons, in a crowd, and while blindfolded. You will reevaluate your training scenarios—keeping what works, discarding what does not, and improving your chances of survival.

As a former corrections sergeant and tactical team leader, Rory Miller is a proven survivor. He instructs police and corrections professionals who need techniques that work and unflinching courage.

In DRILLS - Training for Sudden Violence, Miller gives you the tools to prepare and prevail, both physically and psychologically. He shares hard-won lessons from a world most of us hope we never experience.

This is a fight for your life, and it won’t happen on a nice soft mat. It will get, as Miller says, “all kinds of messy.” Training for Sudden Violence 2-DVD set, prepares you for that mess.

Jeff Burger holds fifth-degree black belts in both Shito-Ryu karate and Matsukazi-Ryu ju jutsu. He is a muay thai instructor, trained and certified at Muay Thai Institute in Thailand, who competed in the 2006 Muay Thai World Championships. He is a Chinese Boxing and Tai Chi Chuan Sifu, trained and certified in China. He has studied stick, knife, and firearms with Hock Hochheim (Force Necessary) and Avi Nardia (KAPAP). Jeff Burger teaches martial arts and self-defense in Salem, … More »