Fiction Bundle | YMAA
Skip to main content
FREE Shipping Order Over $70. (US Only, Conditions apply)    |   Up to 40% Off. Exclusions apply. 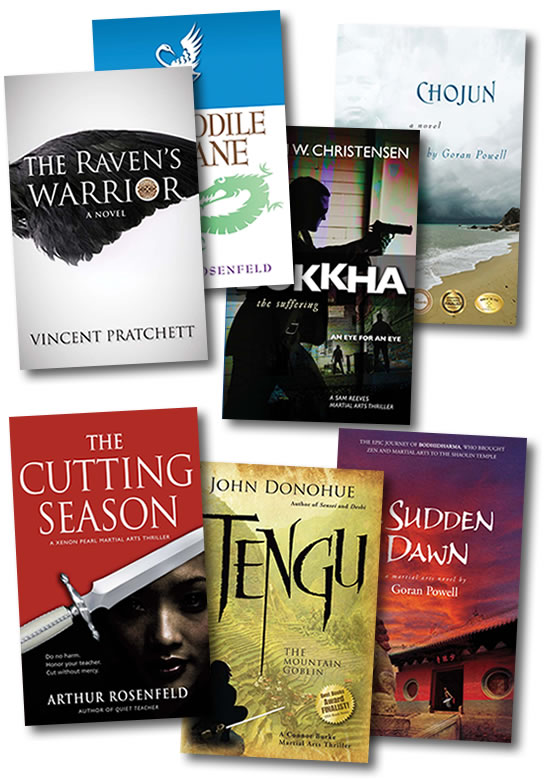 Morality, danger, honor, fear, war, fantasy, legend, and action are but a few of the themes in the fantastic collection of fiction rooted in the martial tradition. Every one of these authors is an award winning writer combining amazing stories with the realistic martial art sensibility. Take a break and enjoy an adventure that will probably get you in trouble for staying up too late! This collection makes a great gift item for martial arts enthusiasts!

Book: The Cutting Season by Arthur Rosenfeld (Hardcover)
Dr. Xenon Pearl, the best neurosurgeon in South Florida, is the reincarnation of a vigilante Chinese warrior, or at least that's what the recurring vision of his dead kung fu master tells him.
B0821

Book: The Raven's Warrior (soft cover)
Wounded in battle, a near dead Celtic warrior is taken by Viken raiders. He is sold into a Mid-East slave market and then dragged further east, through the desert, into the ‘Middle Kingdom’.
B2580

Book: Tengu by John Donohue (soft cover)
A renegade martial arts Sensei known as the Tengu has been recruited to train a splinter group of Asian terrorists with links to Al Qaeda. The Tengu mourns the vanished prestige and cultural heritage of Imperial Japan. He, like the men he trains, believes the West is responsible for destroying the spiritual essence of a once-great culture.
B1231

Book: The Crocodile and the Crane by Arthur Rosenfeld (Hardcover)
As apocalypse unfolds on Earth, two immortals who have survived for 3,000 years hold the secret to an ancient art that can save humanity - but is mankind worth saving?
B0876

Book: A Sudden Dawn by Goran Powell (soft cover)
A Sudden Dawn is a refreshing take on the mythical origins of Kung Fu with a good pace, enjoyable interpretation of legendary characters, and wonderfully written adventures during the long journey across Asia.
B1989

Book: Chojun by Goran Powell (soft cover)
A typhoon brings the renowned karate master Chojun Miyagi into the life of young Kenichi Ota, who must prove himself before he can enter the master’s inner circle. As once-peaceful Okinawa prepares for war, master and student venture to China in search of the deepest meaning of karate.
B2535

Book: Dukkha the Suffering by Loren W. Christensen (soft cover)
In the course of a single week, everything Sam Reeves believed in, everything he knew, everyone he trusted, all would be put on the line. For a family he never knew he had.
B2269