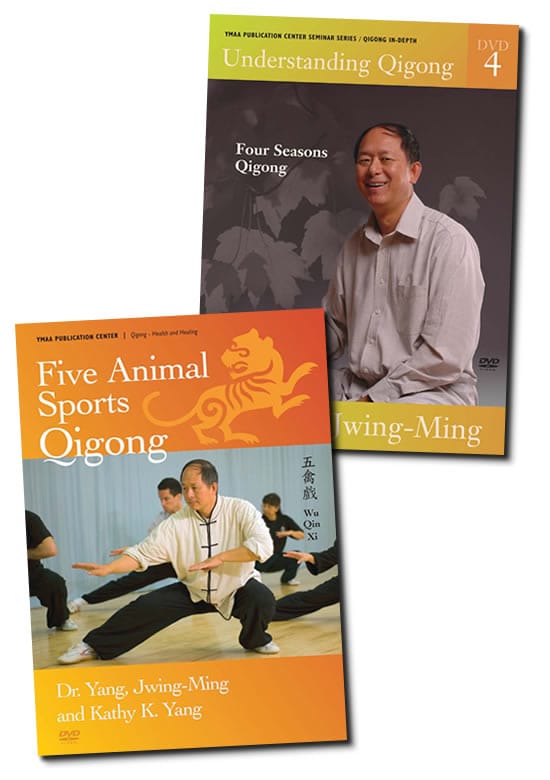 STAY HEALTHY DURING THE CHANGE OF SEASONS! Learn to understand your energy (Qi) and how to adjust to the change of seasons.

The Five Animal Sports, or Frolics, are one of the most ancient and popular sets of medical qigong exercises. Passed down for nearly 2,000 years, it is an effective, fun, and sometimes humorous way to energize the entire body. By imitating the movements and spirit of the Tiger, Deer, Bear, Monkey, and Bird, a practitioner can build their strength and longevity inside and out, and enjoy excellent health.

Learn the correspondence between the internal organs and Five Elements theory during an introductory discussion of Five Elements Theory by Kathy K. Yang. Experience a private lesson with one of the world's foremost masters of qigong as Dr. Yang, Jwing-Ming offers detailed instruction, starting with a brief stretching and warming up section.

It is believed that when we get sick it is often due to the body’s difficulty in adapting to the changes from one season to another. For example, when Fall arrives, it is easier to catch a cold, and when Summer comes, the heart can be too excited. By practicing Four Seasons Qigong, you are able to adjust your body’s Qi during the change of seasons so your health can be maintained.

This multi-language program is captured in High Definition, and builds on the theory taught in DVDs 1, 2, and 3. Dr. Yang's systematic approach to teaching offers deep insight into the ancient art of Qigong with modern scientific data to support his theory from both an Eastern and Western perspective.

Kathy K. Yang began training traditional Chinese martial arts, Taijiquan and Qigong at the age of six under the guidance of her father Dr. Yang, Jwing-Ming. As an active competitor, she has been awarded on several occasions the Grand Champion title in both internal and external Chinese martial arts from renowned U.S. tournaments such as U.S.A. Wushu Kungfu Federation (USAWKF) and A Taste of China U.S.A. All-Taijiquan Tournament. Kathy has taught at the New England School of Acupuncture at MCPHS … More »