Self-Defense DVD Bundle | YMAA
Skip to main content
FREE Shipping Order Over $70. (US Only, Conditions apply)    |   Up to 20% Off. Exclusions apply. 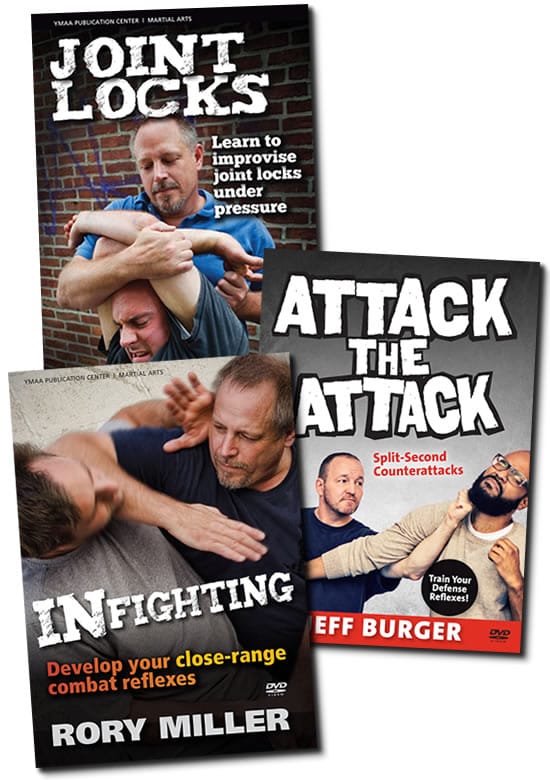 Joint Locks by Rory Miller In this video, Rory Miller makes the case that the problem is not with the locks themselves, but with our teaching methods. A principles-based approach allows relative beginners to improvise joint locks with one hour of training.... ATTACK the ATTACK by Jeff Burger Sharpen your self-defense reflexes and learn split-second counterattacks with Coach Jeff Burger... INfighting by Rory Miller Develop your close-range combat reflexes with Rory Miller. This training can and should be incorporated into all fighting styles.

In this video, Rory Miller makes the case that the problem is not with the locks themselves, but with our teaching methods. A principles-based approach allows relative beginners to improvise joint locks with one hour of training, something that many traditional approaches have failed to do with hundreds of hours.

Joint locks are NOT primary self-defense techniques. If you are in a position that requires self-defense you are justified in and likely need a higher level of force. However, if your job requires controlling violent people with minimal injury you must be good at joint locks and you must be able to improvise them under pressure.

In Attack the Attack, Coach Jeff Burger teaches you to instantly defend yourself and inflict maximum damage at the same time, using dozens of proven techniques.

This modern principles-based system of defense includes the defensive progression: a chronological breakdown of the attack and all possible outcomes. You will analyze your beat efficiency and determine how many blocks and strikes it takes to complete the task. You’ll learn about the OODA loop (observe, orient, decide, and act)—the neurological steps you go through when reacting.

With Attack the Attack you’ll learn the following:

Whether you are a beginner or an experienced martial artist, you will develop a proper mind-set and exceptional self-defense reflexes.

Infighting is close-range combat, in which you defend yourself while simultaneously controlling the opponent’s limbs, transferring his momentum, and forcing him off center.

You will learn basic Infighting Building Blocks, including

“What is infighting? You can call it standing grappling. You can call it a variation on clinch range. Infighting is close contact, chest-against-chest, halitosis range. You are close enough to throw, sweep, strike, strangle, gouge, bite...and not too close to kick, if you know how.

Infighting has the most possibilities, and thus the most variables, of any fighting range. And it is quick. Distance is time and if you're fighting at zero distance you have no time to waste. Offense and defense cannot be separated. You must be able to act on your opponent without needing to know what the opponent is doing, because by the time you know, it is too late.

Many traditional arts work better once you play with them as infighting systems. Infighting is the perfect range, and the perfect game, to integrate your other fighting skills into a unified package that functions below the conscious level.”

Jeff Burger holds fifth-degree black belts in both Shito-Ryu karate and Matsukazi-Ryu ju jutsu. He is a muay thai instructor, trained and certified at Muay Thai Institute in Thailand, who competed in the 2006 Muay Thai World Championships. He is a Chinese Boxing and Tai Chi Chuan Sifu, trained and certified in China. He has studied stick, knife, and firearms with Hock Hochheim (Force Necessary) and Avi Nardia (KAPAP). Jeff Burger teaches martial arts and self-defense in Salem, … More »