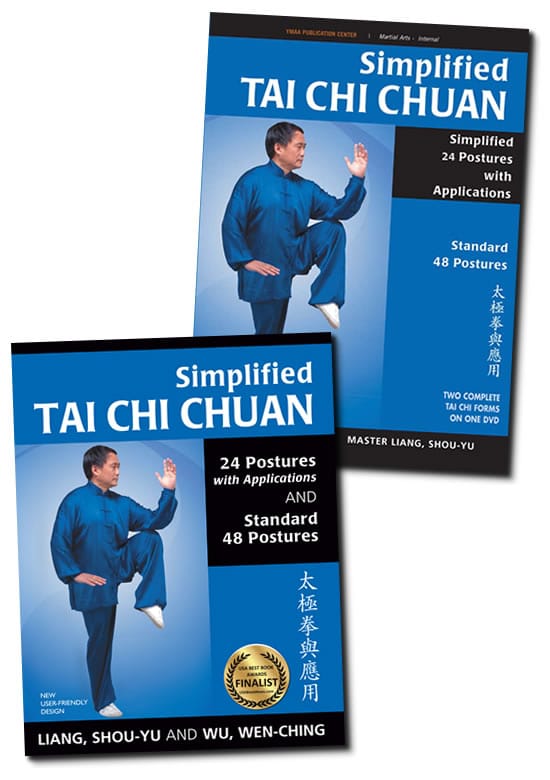 PERFECT FOR BEGINNERS! Grandmaster Liang, Shou-Yu teaches two of the most popular forms of TAI CHI, the ancient Chinese martial art which is often described as ‘moving meditation’. The popular ‘Simplified’ 24-posture form is demonstrated by MASTER LIANG with martial fighting applications. The form is shown from several angles, with breathing instructions. The Standard 48-posture form is also demonstrated.

This item is eligible for free shipping (Conditions apply).

This revised edition of our best selling beginner Tai Chi Chuan book includes a new and modern easy-to-follow layout. Every tai chi movement is presented in 2-4 large photographs with clear instructions, followed by key points to help you learn properly.

Simplified Tai Chi Chuan 24 Posture is one of today’s most popular tai chi forms. Once learned, it can be performed in only six minutes. If you are learning tai chi in a school, a fitness club, a community or recreation center, or even the local park, this is the tai chi form you are likely to encounter.

The martial arts applications for each posture are shown so you can understand that every movement has a purpose.

Simplified Tai Chi Chuan 48 Posture is a popular tai chi form practiced by those who want a longer, more challenging sequence. Once learned, it can be performed in only twelve minutes. The forty-eight posture form is often the next form a student studies after learning the twenty-four posture form.

Here’s what is inside this book:

No matter your age, tai chi chuan is a wonderful way to improve your health and well-being.

Grandmaster Liang, Shou-Yu teaches two of the most popular forms of Tai Chi Chuan, the ancient Chinese martial art which is often described as ‘moving meditation’. The popular ‘Simplified’ 24-posture form is demonstrated by Master Liang with martial fighting applications. The form is shown from several angles, with breathing instructions. The Standard 48-posture form is also demonstrated.

DVD-only Detail Sections for both forms instruct each movement, and offer ‘guidelines’ for refining your training. Chapter markers for each technique and extensive DVD navigation make it simple to find any posture on the DVD with just a couple clicks, so you can continue your study where you left off.

In only 20 minutes a day, you can gain the health benefits of Tai Chi Chuan: increased strength and energy, better balance, and improved bodily awareness; Excellent for beginning students, those who want a low-impact alternative to jogging or aerobics, and those with limited time for exercise.

This program includes a bonus slideshow of photographs of Master Liang demonstrating both the 24 form and the 48 form, so you may analyze Master Liang's postures.

Wen-Ching Wu was born in Taiwan, China in 1964. He loved Wushu and many othe sports since a young age. During high school he was on the school's basketball an softball teams. He graduated from high school as a salutatorian. He came to the U.S. in 1983 to study Mechanical Engineering and in 1988, he graduated with honors fro Northeastern University, with a BSME degree. … More »