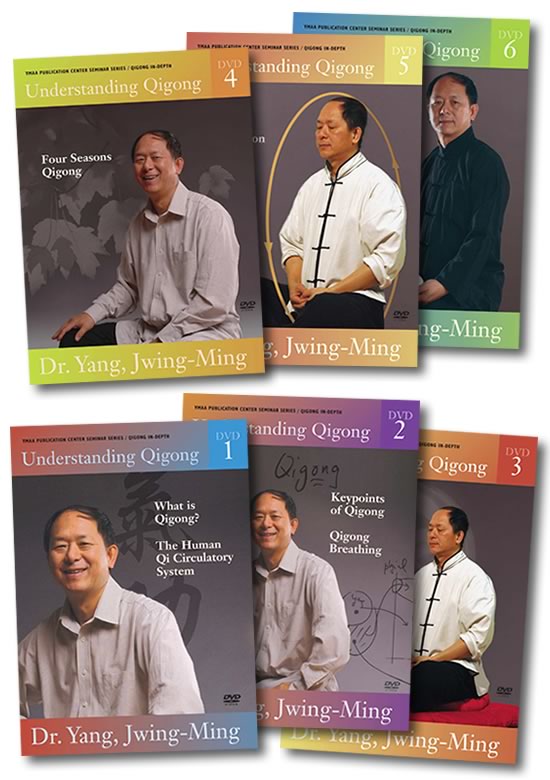 Theoretical, practical, and profound. There is no other collection that plumbs the depth of qigong like Dr. Yang's "Understanding Qigong" series. From beginner to advanced, you will refer to this collection for years to come. Starting with the big questions, what is qigong and how does is work? then exploring the principles and keys to successful practice. You will continue with profound lessons in proper meditation and how it relates to health and spirit. Further programs offer insights and exercises for keeping the body healthy during the change of season. A special program dives deep into breathing and how qigong uses it for health and martial arts. No wonder Dr. Yang is one of America's most sought after instructors on qigong! Bundle contains all 6 DVDs of the Understanding Qigong Series.

In these two video courses, Dr. Yang, Jwing-Ming explains the concepts of Qigong and the human energetic circulatory system. Dr. Yang's systematic approach to teaching offers deep insight into the subject of Qigong with modern scientific data to support his theory from both an Eastern and Western perspective. He presents a clear and fascinating explanation of Qigong theory, and offers a simple Qigong exercise for you to begin experiencing Qi.

Dr. Yang, Jwing-Ming teaches the theory and practice of embryonic breathing. Also known as ‘back to childhood breathing’, this qigong meditation technique is the foundation of internal cultivation and advanced practice. Embryonic breathing develops excellent wellbeing and increases your sensitivity and awareness.

Small Circulation meditation is also known as the microcosmic orbit in the Buddhist tradition and yoga. Using this technique, one may develop the main energetic circulation pathway of the body, which in turn provides abundant energy to the circulatory system branching out to the entire body. The practice can improve your general health, and it is a fundamental step in the practice of spiritual enlightenment meditation.