Kung Fu for Kids (Streaming) | YMAA
Skip to main content
Free Shipping (US Only, Conditions apply) on orders $75 or more - We are shipping as normally without delays. 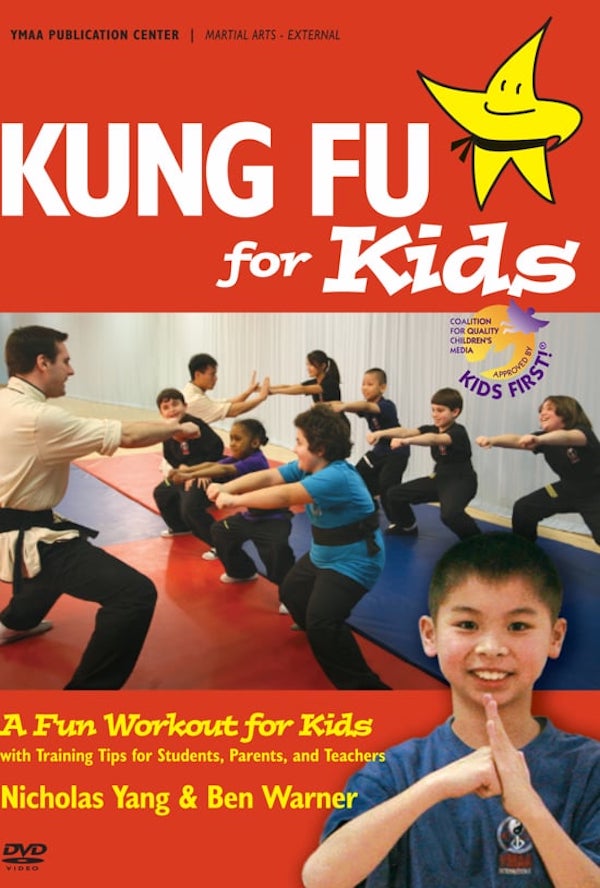 A fun workout for kids, with training tips for students, parents, and teachers. Kung Fu for Kids is an instructional program that teaches children the basics of traditional Kung Fu in a fun and exciting way.

A fun workout for kids, with training tips for students, parents, and teachers. Kung Fu for Kids is an instructional program that teaches children the basics of traditional Kung Fu in a fun and exciting way. It starts with a simple, follow-along workout that introduces calisthenics and the basic stances, blocks, punches and kicks of the YMAA kids curriculum. It ends with a short cool-down routine to help children improve their balance, breathing, and mental focus.

This video features Ben Warner, who has been a children's instructor since 2001, and several students of varying levels from the YMAA Boston class. Nicholas Yang, the President of YMAA, makes corrections while students demonstrate.

A detail section is also included with talented students demonstrating the techniques in greater detail for those who want to learn more.
Includes
• Safety precautions to follow when practicing Kung Fu.
• Benefits and purpose of Kung Fu training for kids.
• Appropriate time and place to use what has been learned.
• Easy follow-along workout, fun for parents and kids together.
• Cartoon interludes starring Shing (star).
• Interviews with teachers and parents About the benefits of Kung Fu for Kids.
• 18 video lessons / 89 minutes / 1 hour and 29 minutes.

The discipline and focus achieved through training Kung Fu extends to many other aspects of everyday activities in life, including academics, sports, music, and literature.

Instructor Ben Warner began studying with Dr. Yang, Jwing-Ming in 1998. In 2000, he began assisting the YMAA children's kung fu program. In 2001, he became a full time instructor and in 2005 he became head of the YMAA Boston kids program. He has also organized martial arts programs for several schools in the Boston area.

In 2002, Ben became a regular instructor for the adults Shaolin program. As well as being a main Shaolin instructor he became the head of the sparring program at YMAA Boston in 2007. Ben has assisted in Dr. Yang's Boston and international seminars since 2002. He has taught Shaolin long fist and white crane seminars. He has also assisted with qigong, chin-na, sword, saber, and staff seminars.

In 2005, Ben was certified as an instructor with Pavel Tsatsouline's RKC kettlebell program. Since that time he has worked with several internationally renowned fitness instructors including Pavel Tsatsouline, Steve Cotter, Steve Maxwell and Mandla Nkosi. In 2011 Ben co-founded The Green Dragons, an organization which teaches kung fu, fitness, nutrition and gardening to kids in the Boston area. thegreendragons.com In 2012 Ben became the owner and operator of YMAA Boston. He now organizes and teaches classes for kids, teens and adults.

Kung Fu for Kids 1 & 2 are his first programs. He has also appeared as a martial arts performer in many programs by his teacher Dr. Yang, Jwing-Ming. Mr. Warner lives with his family in Jamaica Plain, MA, USA.