Unity or Something Like It | YMAA
Skip to main content
FREE Shipping Order Over $70. (US Only, Conditions apply)    |   Up to 20% Off. Exclusions apply. 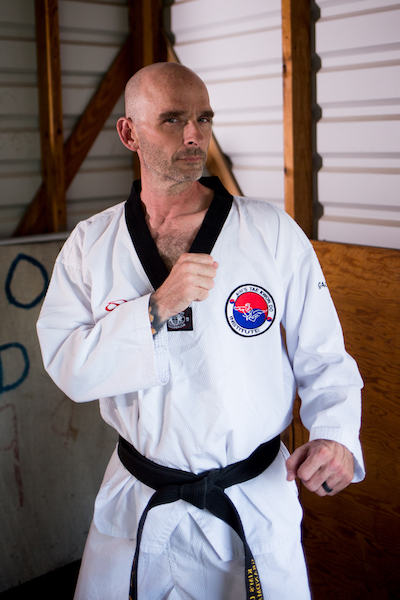 Let this be known: I cannot stand running. I ran a lot when I was younger, mainly because somebody was always trying to beat me. Why? Acerbic wit was my weapon of choice.

Let this be known: I cannot stand running. I ran a lot when I was younger, mainly because somebody was always trying to beat me. Why? Acerbic wit was my weapon of choice.

I tell ya, life ain't easy for a boy named Doni.  About the time I hit twelve years old, I stopped running and stayed to fight. I got pounded, but at least I didn't have to freaking run. As much as I do hate running, it's great for cardio, especially for taekwondo, so I run like an idiot in every class. But unlike my fellow classmates, I'm an idiot with a plan: I pace myself. They sprint on by. I keep jogging, slow and steady, like the old guy I am. You can probably guess how this is going to turn out.

At the end of the night, when it's time for conditioning, the kids are gassed, but I still have a little in the tank. This happens every single class. These kids are incapable of learning. I don't know much about history, don't know much biology, but what I do know is teenage boys are dumbasses. They get in a pack, start competing with one another, and lose all sense of foresight and restraint.

When it comes to sparring, they are no less enthusiastic. I'm pretty sure sparring is for instruction, not destruction, but there's no telling them that. Even if they have their school pictures the next day.

I do see advantages to working out with them though. Train with students who are younger and in better shape, and you'll be a killer if you have to fight someone your own age. That roundhouse might not impress an eighteen-year-old, but it will sure as hell knock the crap out of a forty-year-old.

At the other extreme—the Centrum end of the spectrum—we have Dawn and Ray. At least we used to have them. I haven't seen much of those two lately. They are husband and wife, both black belts in their fifties, and both way past their due date. They are the taekwondo version of Laurel and Hardy. If they could ever kick high—or low for that matter—you wouldn't know it now. They have the bearing of haughty old teachers. They're above everything we do, but they'll deign to take part nonetheless, perhaps for our edification. Put all this together, and you have the perfect mix for physical comedy. That's just what their workouts are.

Their main motivation for attending class is to yell at the rest of us. Their bodies have failed them, but their mouths still work at the black-belt level, so they have to get in there and kick ass.

The good part of having Dawn and Ray around is that they make me look like an actual runner. They just putter along at a brisk pace. They're like mall walkers but adorned in pajamas with a garish belt. Well, mall walkers.

Hey, I have to yuck it up now. I'm about ten years from joining them in front of Auntie Anne's.

I'm already on my way down that path. The young 'uns grab their uniforms and run off to class, but I can't take part without a doctor-prescribed knee brace for my lateral meniscus tear, a compression brace for my right knee, and shitloads of Doan's back pills. Every morning after class night I limp for an hour because my left heel is ablaze. I should probably get that looked at.

Maybe I should get my head checked too. I'm destroying my body, and it doesn't appear to concern me—and that is what concerns me. Explode now and worry about later . . . later. Look at it this way, and I'm not so different from the teenagers in my class. That's a depressing thought.

All these ailments should make a sane person take up something more appropriate for his age. Stamp collecting, for example. Or model trains. They're cool.

I am giving this my all and logging a lot of hours, and I'd like to think I'm more committed than your average weekend warrior, but sometimes I see through that illusion. I tell the grandmaster about my rigorous solo workouts, and I can almost hear what he's thinking: "Great, Doni. The Kukkiwon will be calling you soon for pointers."

The Kukkiwon in Seoul is the world headquarters of taekwondo. If you knew that, my joke probably packed more punch.

The grandmaster has told stories about his first taekwondo lessons as a kid in Korea. He was five years old. His master had the children place their heads on the ground and walk in circles. He wanted to make them as dizzy as possible. It was the first step toward improving their equilibrium.

The grandmaster said around that age, students lie on the floor with an adult standing on either side. Each takes a leg and pulls. Imagine putting the kid in a split, but then going way farther. They keep going until they break the musculature and tendons. A bit uncomfortable perhaps, but when the kid heals, he's able to kick higher than any human being should.

Don't try that one at your American school.

When you go through that kind of shit—at five years old no less—and then some dumb white dude tells you he had a good training day doing fifty kicks on his tour bus, you have every right to roll your eyes.

No One Owns Taekwondo

Despite all the taekwondo schools in the world, despite all the organizations and governing bodies, not one person owns this art. It's everyone's, and in that way, it is no one's.

You can say the same for music. We all love it. Many of us create it. We listen together, and we listen alone. We can say what music seems to be, but no single person holds the definition of what it is. There's something magical about that.

Maybe unites is too strong a word. And yet taekwondo makes us associates.

The above is an excerpt from Even If It Kills Me: Martial Arts, Rock and Roll, and Mortality by Donivan Blair, Bassist for the Toadies with T. G. LaFredo

Donivan Blair is the bassist for the rock band the Toadies. Over the past twenty-five years he has recorded seventeen albums and toured the world. Spoiler alert: He holds a first-degree black belt in taekwondo. Donivan Blair lives in Amarillo, Texas, and trains in a shed behind his house. … More »