The Setting Sun and Tai Chi Drills | YMAA
Skip to main content
FREE Shipping Order Over $70. (US Only, Conditions apply)    |   Up to 40% Off. Exclusions apply. 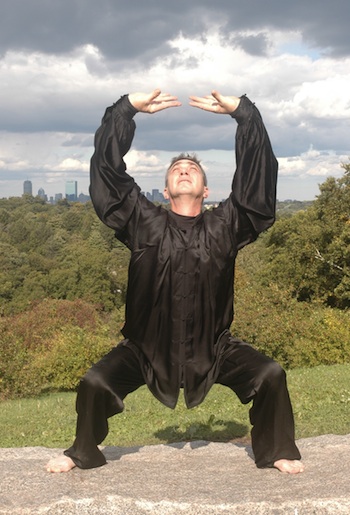 If you have an opportunity, perform tai chi drills as well as the tai chi form in the setting sun. Relax, but do not collapse your entire body and surrender physically and mentally to the gentle warmth and to the powerful drawing and cleansing energy of the setting sun. Of course, second best would be indoors while the sun is setting.

Start in a high stance at first, and then over time lower your stance and practice longer. Train the stances before you work on the upper body movements. Later, you can also train only the upper part of the tai chi movements by, for instance, doing the form while seated on the edge of a chair. This helps you to fine-tune the movements, and your tai chi will be improved when you put them back together.

Each stance should be trained in a stationary position, and then you should train moving from one stance to the other. Remain relaxed, with a little bit of slack throughout the body, which allows the energy and blood to flow and nourish the body. Connect energetically to the ground. If there is too much tension in the muscles, the blood and the energy is stagnant and sealed, and your tai chi is not an internal art anymore; it is only an external form.

Stand with both feet together, hands beside the body with the middle finger touching the middle of the outer thigh. Try to sense a connection to earth and heaven. Align the spine, drop the shoulders, breathe deeply, and put your mind in your center of gravity energy center. This stance can also be trained with your hands on your belly to reinforce the sensation of the lower energy center. When standing, repeat this thought: “I am a great mountain.” You should be calm, quiet, and centered.

Stand with the legs about shoulder-width apart, feet pointing straight ahead, and slightly bend the knees, but not too much. The weight is evenly distributed, 50 percent in each leg. Keep the head suspended. Breathe deeply through the nose. The tongue touches the roof of the mouth. During exhalation, emphasize the sensation of the mind going out into the four gates, and on inhalation, back into your lower energy center.

Horse stance is very common in all Chinese martial arts. In horse stance, your squat can be as low as bringing the thighs parallel with the floor. In this tai chi form, you will not be asked to squat that low, but that can be an excellent additional training method for the thighs and entire body. You will experience horse stance throughout the Sunset Tai Chi form at various times, as you transition between the postures.

There are two empty stances. In the first empty stance, the feet are close to one another. In the second empty stance, one leg is out in front of you, ready to kick or step.

In both empty stances, 90 percent of your weight is on the back leg and 10 percent of your weight on the front leg. The front leg gently touches the ground with the ball of the foot and is turned inward 45 degrees. It is important to distribute the weight of the back leg through the knee, down to the floor, and mentally, you may go down even deeper into the ground, into your roots (30 inches deep). This stance is also called cat stance, which reflects the spirit that needs to be felt when holding this stance.

First, start this stance standing high and as your legs become stronger, drop the stance lower and lower while holding it for longer periods of time: three to five minutes on each leg. To make sure you do not injure your knees, develop a balance between strength and flexibility in your legs before you require them to perform difficult tasks, such as low stances.

Your waist can be in one of two positions. At first, turn the waist away from the front leg, the leg with no weight. Then when you can keep your weight moving down through the back leg, which holds the stance, you can move the waist toward the front leg, which has no weight. You will see that the second waist position in this stance is more difficult; both on the knee of the back leg, as well as on the lower back.

Forward stance has 70 percent of the body weight on the front foot and 30 percent on the back foot. The back leg is slightly bent. Do not bring your weight farther forward than the toes. Your knee should not be farther forward than the toes. The best indicator is the sensation that the weight is moving through the knee rather than into the knee. Direct your body weight through proper alignment of the leg into the ground. The toes should be turned so that there is a 45-degree angle in the feet and about one to two inches from an imaginary line drawn between the toes of the front leg and the heels of the back leg. Make sure your legs are always at least shoulder-width apart. In traditional tai chi chuan, this stance is called mountain climbing stance or bow and arrow stance.

Back stance has 60 percent of the body weight on the back leg, 40 percent on the front. The principles are the same as forward stance. When you sink into the back leg, be sure to tuck the tailbone slightly in. Distribute the weight right into the floor, not your knee. You should maintain a solid connection to the ground with the soles of the feet.

Stand in horse stance with your feet parallel, sacrum tucked in, head suspended, and shoulders dropped. Put the center of your palms on your waist. On the next inhalation, focus your mind in the lower energy center and on the sensation of 50 percent of your weight on each leg. Then, to begin shifting your weight from left to right, close your eyes and try to move as if you were pouring your body weight like sand, moving from the left leg to the right, slowly, paying attention to the sensation of pouring the sand, grain by grain.

Emphasize your weight moving down through the right knee into the floor and not into the knee. The left leg, which has 20 percent of your weight on it, is still parallel to the right leg. The inner soles of the feet are parallel to one another. You also want to keep both inner arches ‘alive’ and engaged, especially on the left, because the action of shifting into the right leg tends to collapse the arch of the left foot, and vice versa.

When a tiger attacks, the warrior waits until the last moment to respond. When the tiger jumps to attack, the warrior shifts his weight to the left side to evade the attack while his right arm sticks a knife in the tiger’s left temple (do not try at home!). Try to recreate the spirit of the warrior when performing this stance. Shift your weight from side to side 20 to 30 times. Over time, you will be able to perform lower and longer stances. There are other traditional stances commonly used in longer tai chi chuan forms.

Once you understand the stances and can perform them without thinking, you should start mixing them and move from one to the other while maintaining the internal visualizations, which are further explained in Sunset Tai Chi and Sunrise Tai Chi books.