Chojun Miyagi, The Typhoon Man | YMAA
Skip to main content
Free Shipping (US Only, Conditions apply) on orders $75 or more - We are shipping as normally without delays. 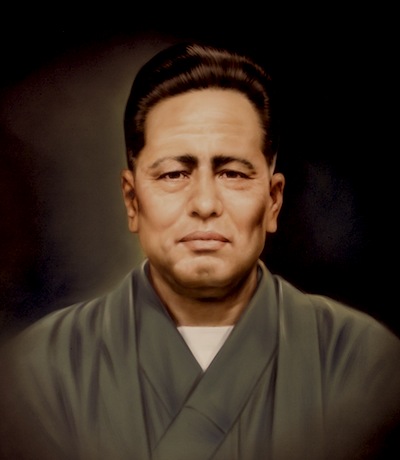 (The following is an excerpt from Chojun A Novel by Goran Powell. Chojun Miyagi, born in Higashimachi, Naha, Okinawa, April 25, 1888.  He began studying Karate at age nine.  He first learned martial arts from Ryuko Aragaki who then introduced him at age 14 to Kanryo Higashionna (Higaonna Kanryo.)  He continued studying and teaching until his death from heart disease in Okinawa October 8, 1953.)

(The following is an excerpt from Chojun A Novel by Goran Powell. Chojun Miyagi, born in Higashimachi, Naha, Okinawa, April 25, 1888.  He began studying Karate at age nine.  He first learned martial arts from Ryuko Aragaki who then introduced him at age 14 to Kanryo Higashionna (Higaonna Kanryo.)  He continued studying and teaching until his death from heart disease in Okinawa October 8, 1953.)

I sit now to write my memoirs, not because I am a man of any great importance to the world, but rather because I knew such a man. His life changed the lives of millions and changed mine in ways I could never have imagined when I first met him, all those years ago, as a boy of just nine years.

Today his name is written in karate histories as one of the truly great Okinawan masters. It has even been immortalized in a series of Hollywood movies, but apart from featuring a karate master of the same name, the movies bear little resemblance to the man I knew or the times in which he lived. The Mr. Miyagi I knew was called Chojun Miyagi, and he lived and died in Okinawa. He was born in 1888 in the island’s capital, Naha. He traveled occasionally to China and the Japanese mainland, and once spent several months touring Hawaii and demonstrating his art, but he never made it as far as America where his karate is so popular now.

Miyagi died relatively young, in 1953, at the age of sixty-five. People say karate training is good for the health and promotes longevity, and I believe this to be true. However, no amount of training can protect against heart disease or temper the soul for the tragedies of the war that descended on Okinawa with such ferocity in 1945. Chojun Miyagi died a long time ago, but to me, he is still alive. Each day when I practice karate he is with me, beside me, his hard hands guiding my own, his soft deep voice in my ear, urging me to stand firm, to tense here, to relax here, to inhale deeply, to exhale slowly.

When I retired from my job at the harbor, I realized I was the same age as Miyagi was when he died, and ever since that realization, I began to feel his presence more persistently. His ghost visited me not only in my karate, but also in my dreams and even in my waking moments, sitting on my tiny balcony, staring out over the uneven rooftops to the sea. It seemed my long-awaited days of lazing in the sunshine in tranquil retirement were not to be. Miyagi had other ideas and I could feel his disapproving gaze upon me as I sat watching the waves. It took me several days to realize what my heart, and Miyagi’s ghost, was telling me: it was time to stop idling and put down on paper my memories of my master, my teacher, my sensei. It was time to pay tribute to the name of Chojun Miyagi.

I met Chojun Miyagi by the sea, at the end of the long, hot summer of 1933. It was a day I’ll always remember, for many reasons, though it began like any other on our island.

I’d been wandering along the shoreline from my hometown of Itoman to the little village of Nashiro, where the long beach provided rich hunting grounds for sharks’ teeth and other treasures left by the sea. I was moving quickly, stopping only to examine any unusual shells or stones that caught my eye.  When the sand of the sweeping bay gave way to stony ground, I following a haphazard trail through the rocks to the rugged cliffs of Cape Kyan, the southernmost point of Okinawa.

A shallow reef hugs the Okinawan coastline and I swam out to dive among the coral, searching for oysters that might conceal a pearl. I dreamed of going deeper, all the way to the bottom of the sea like a real pearl diver, but my lungs were too small and I was forced to make do with mussels, clams, and starfish.  I must have practiced for several hours, unaware of the time, until I emerged from one particularly long dive and found myself in darkness. I wondered, had I really been diving so long that night had fallen?

Bewildered, I spun around in the water, examining the sky. I could still make out the faint outline of the sun behind a sprawl of angry black clouds. Warm, fat raindrops splashed on my arms and my shoulders, and I heard the growl of distant thunder. I was forced to swim with all my might to avoid being cast into the jagged rocks at the beach’s end. At last, a benevolent wave hurled me safely ashore and I lay in the seething sand, exhausted.
I cursed myself for my stupidity. The wetness of the wind and the growing swells of the sea should have been my clues. I was a child of Okinawa, and every Okinawan knew that in the summer months, the Kuroshio current brought more than warm water from the tropics—it brought typhoons.

It wasn’t the first time I’d seen a typhoon, they’re common in Okinawa at that time of year. But it was the first time I’d been so far from home. Worse still, the way home would take me over cliff-tops and open beaches where I’d be at the mercy of the wind.  Going home would be impossible, but I couldn’t stay on the beach. I rose unsteadily to my feet. The wind lashed my back with sharp sand, and a sudden gust hurled me toward the rockfall. I slammed into a boulder, taking the impact on my palms and cursing myself.  I had to think. The answer came to me through my hands. It was in the rocks that I was holding.

I remembered a small cave that I’d noticed at the top of the rockfall. I didn’t relish the idea of climbing up the rocks in this wind, but it was my best hope of survival, and I had to do it now, before the full force of the storm hit. I pressed my body close to the rocks, my fingers digging hard into the glistening surfaces, and climbed swiftly and evenly up.

Near the top of the rockfall, I caught sight of the cave exactly where I’d remembered it. There was a huge boulder like an enormous stepping-stone lying at its entrance. I climbed up onto the boulder and entered the cave on my belly. Inside it was cramped and dark, but that didn’t matter. It would make a safe place to wait out the storm.

Outside, the wind announced its mounting anger ever more loudly. I became curious and peered out from the cave mouth to watch it unleash its full fury on the island. I was about to return to the dimness of the cave when to my astonishment, I saw a man on the cliff-top. At first I imagined that, like me, he’d become stranded on the beach and was trying to get away. I shouted to him, urging him to shelter in the cave with me, but the wind stifled my cries.

The man was standing on the highest point of the cliff. I watched in horror, sure he would be seized by the dreadful wind at any moment, but he stood firm, facing out to sea, his arms raised before him, his hands balled into fists, and like one of the palm trees, he appeared rooted in the earth.

I saw him punch slowly into the wind, first one hand and then the other, in a silent battle with the typhoon. Occasionally he would turn his back to the sea, fighting to keep his balance, and then spin to face into the wind once more. Suddenly both hands snaked out together, fingertips slicing the air. Three times he repeated the motion, and then stepping back, his arms wheeled before him and extended, one palm high, the other low.

I watched, barely aware of the storm, as he repeated his curious movements over and over. The man was built like a bull.  His face was broad and smooth, his lips thick, his jaw strong. The focus of his gaze was on the far horizon, as if challenging the storm. The black hair was oiled and combed back, as was the style in those days. He was naked save for a pair of khaki pants cut off below the knee. His body was heavily muscled, like a strongman’s from the comic books I saw from the mainland. His thick neck sloped down to broad shoulders and his chest was deep and powerful. The muscles of his stomach stood out like a ripple of waves. His forearms bulged, and his thick legs held him firm against the wind. But it wasn’t the size of his muscles that I found so fascinating, but rather the way they changed and flowed when he moved. I watched him repeat the same movements for what seemed like hours. All fear of the storm banished by the presence of this man who could dominate a typhoon with his bare hands.

I must have fallen soundly into sleep because when I woke the sun was shining, and I found myself in the strongman’s arms. He was carrying me like a baby to my home in Itoman, the storm little more than a bad dream.

“Where do you live?” the typhoon-man asked, carrying me as easily as a straw doll. I pointed dumbly to my house, unable to find the courage to speak. The typhoon-man had me in his arms, arms powerful enough to defeat the dreadful wind. I felt warm and safe and not in the least embarrassed at being carried like a small child.

After a week, only then did I summon the courage to ask my father about the typhoon-man. He told me I’d been rescued by Chojun Miyagi, the head of a family of Okinawan nobility.  I asked what Miyagi had been doing on the cliffs.

“Miyagi is a master of to-te, (karate)” My father told me

Life returned to normal.  I was free to go to the capital in search of the typhoon-man. When the school came into view, I saw Miyagi’s broad frame striding a little way ahead of me on the street. I fell in step behind him, summoning the courage to address him.

“You’re too young,” he said without looking round.
“Too young for what?” I asked, hoping the answer wasn’t what I knew it was going to be.
“To learn to-te.”
“How do you know I want to learn to-te
“I know.”
“How did you know?”
He fixed me with his dark eyes, “I have a sixth sense.”
“Really? Truly?”
We reached the gate of the school where Miyagi had his dojo and he swung open the heavy iron grille.
“How old must I be to learn to-te?” I asked.
He looked me up and down. “Fourteen.”
I was devastated. Fourteen was almost five years away.
“Come back then,” he said, entering the yard.