Krav Maga Control and Disengagement Strategies for Social Violence | YMAA
Skip to main content
FREE Shipping Order Over $70. (US Only, Conditions apply)    |   Up to 20% Off. Exclusions apply. 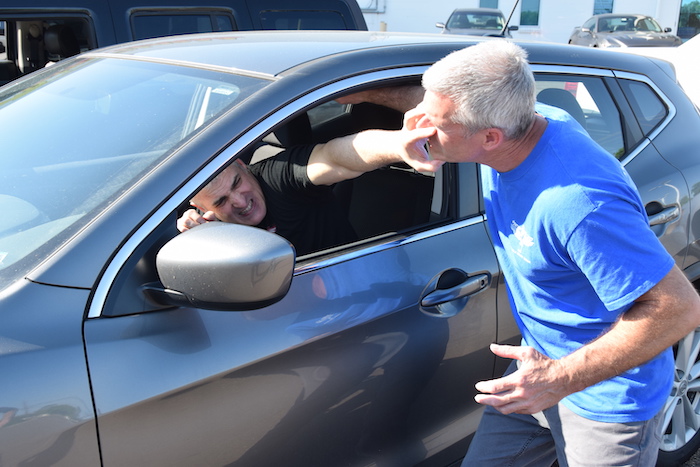 A moment of anger leading to violence can cost you everything, literally.  When facing the specter of social violence – a confrontation you can avoid and escape – how do you best opt-out? How do you walk away without feeling emasculated or that you blinked first? Ultimately, how do you disengage convinced that it was his lucky day?

Emotional regulation is mental krav maga (and any other well reputed martial art.) Mental regulation, in the face of insult or provocation, may be the most difficult tactic to learn and execute.  Despite any indignation or effrontery, you may experience, it behooves you de-escalate yourself, deconflict and disengage.  In short, nothing but your ego requires or drives you to return a hostile stare/gesture or aggressively respond to verbal insults.

Certainly, this is more easily said than done. The bottom line is to understand that engaging in social violence is simply not worth what it could cost you. The provocateur is the one with the problem; not you. You must take a deep breath or series of deep breathes as a conflict unfolds to facilitate and adopt this all-important concept of disengagement.

Founder Imi Lichtenfeld emphasized, “The most necessary thing, is to educate you—and that is the hardest thing—to be humble. You must be so humble that you don’t want to show him that you’re better than him. That is one of the most necessary things for pupils. If a pupil tells me, ‘I fought him and beat him,’ it’s no good,’”as stated in Julia M. Klien’s article, “Don’t Get Hurt,” Philadelphia Inquirer. As noted, social violence is any confrontation from which you can about-face and walk away. Simply stated, you can opt-out. When facing the specter of social violence, if no body contact is made with you, as glib as it may sound, if there is “no harm, (then there is) no foul.”

The reality is that some people will tolerate effrontery and abuse while others will not. You must try to become one of the former. A large part of “awareness” is to understand your capacity and limits.  What verbal or physical abuse you might accept or what actions will cross your proverbial “redline” is obviously your decision.

Paramount, know what your redline is and, for the sake of violence avoidance, push it back as far as possible (assuming the provocation is simply a verbal or gestural assault – not physical). Even better, try to erase it regarding verbal or visual incitements. Sublimate any instinctive urge to accept or thrown down against an inconsequential useless challenge. You can accomplish this by using a self-recognition tactic. This ability allows you to directly recognize your ego’s vulnerabilities, accept them, and create coping or deflecting mechanisms. You can then prevent a hostile person from sinking any hooks or using typical provocations against you.

Cognitive restructuring is the key to any anger management strategy. As Imi Lichtenfeld emphasized, “The hardest thing is to be humble.” Emotions must be contained, moderated, and controlled. In short, recognize impending social violence to prevent it from controlling your immediate future.  Lichtenfeld recognized that true power rests in self-control by preventing others from eliciting a response from you that you have not consciously chosen. If you can swap angry emotions with alternative emotions, your anger will release or dissipate preventing aggression and violence.

Learning emotional competency is just that; a process that requires effort and practice. As noted, the ability to ignore hostile language and words is, without question, difficult. When you can regulate yourself, you are obviously best prepared for any attempt to control a vortex of chaos surrounding you. You must master yourself if you wish to avoid avoidable conflict.

Simple logic would dictate that if a verbal attack is unfounded or untrue, why become upset about it? Yes, this is easier said than done. When an aggressor attempts to slam one of your go buttons or yank one of your triggers, you have mentally prepared for it. For example, you know that you are not stupid, incompetent, feckless, or any other myriad of insults he might hurl at you. Accordingly, you have a practiced and shelved appropriate non-hostile or neutral responses stored in your own brain to govern your actions. This is a calming response for you first and foremost. The aggressor becomes inconsequential if this is timely and correctly done.

Practicing controlled breathing is universally known to facilitate this invaluable capability of self-regulation. Usually, a deep inhale with a four second hold followed by four second exhale works well. Ultimately, if you know you can kick his ass, you have the ultimate power. So, use your mental discipline and moral fiber to ignore the incident.

Anger is a state of arousal that is incremental. Note that rage is the supreme form of anger when someone has discarded any social or legal inhibitors—dis-inhibition about using violence. Emotions dominate everything when your reptilian brain assumes control. Emotions immediately hijack reasoning. When our heat beats per minute (BMP) rises just ten percent, the truth in any dispute becomes less and less relevant. The altercation evolves exclusively into winning or losing. And there is only losing in a scenario of social violence. If you physically win, you lose legally. If you lose a fight, you may be severely injured or worse.

Triggers, either verbal or visual, are environmental cues that confiscate your past programming to automatically and unconsciously activate a hostile response. You may react as though your survival is at stake when it is decidedly not. A triggering event enables you to dispense with social mores and rules; you are free to act on your impulses or desires. Dispense with your triggers; shut them down ahead of time.

Manage any and all behavior associated with anger with aggression management. Anger and anxiety place the body in a similar physiological state. Therefore, tactics to alleviate anxiety may also be used to defuse anger.

You can control two factors—(1) diaphragmatic breathing and (2) muscle relaxation and control, to reduce these negative emotions. Any emotion management must first recognize what your emotion is. To this, you must affect label yourself: “I am angry” or “I feel disrespected” are examples found in Douglas Noll’s book, De-Escalate. In affect labeling yourself, you avoid acting unconsciously or out-of-control heedless of good common sense and reason. Knowing and recognizing that you are experiencing an emotion of anger or disrespect will calm you down. Most important, such vital recognition will prevent a hostile counter-reaction.

You can’t figuratively and literally afford to take the bait someone is offering you. Know that you can kick his ass and you don’t have to prove it. You’ve got too much to lose.

Social violence is just that: a non-life threatening situation. Simply and guardedly, walk away. You don’t need to risk putting your hard-earned martial skills into practice only to be sued, convicted, and, possibly, incarcerated. Emotions must not hijack your reasoning of what is ultimately at stake. Paramount, you must recognize what triggers a situation is tugging at and shut them off. Be secure in your masculinity or femininity. Other mental discipline skills might include letting the parking space go or letting an aggressive driver pulling in front of you.

Let someone else teach the aggressor a lesson. They—not you—will pay for it. Remember, if you physically beat down and injure a provocateur, even if you prevail in criminal court, you are likely to face civil proceedings. Financial penalties might include compensating the injured party for lost earnings, medical bills, pain, and suffering along with the prospective of a jury awarding punitive damages to teach you a lesson. Keep in mind that the burden of proof to prove civil liability is less restrictive than a prosecutor’s burden of proof in requiring victim prove simply that is more likely than not that your actions caused physical injuries, mental anguish, and other losses.

Confidence, importantly, not overconfidence, that you have an ability to physically handle yourself in most any situation should allow you to disengage without a dent in your pride. Lichtenfeld’s goal was that you may “walk [away] in peace.” It’s his problem; not yours. Good krav maga instills the mindset that it was your would-be adversary’s lucky day and, conversely, if he attacks you, it is his unlucky day.